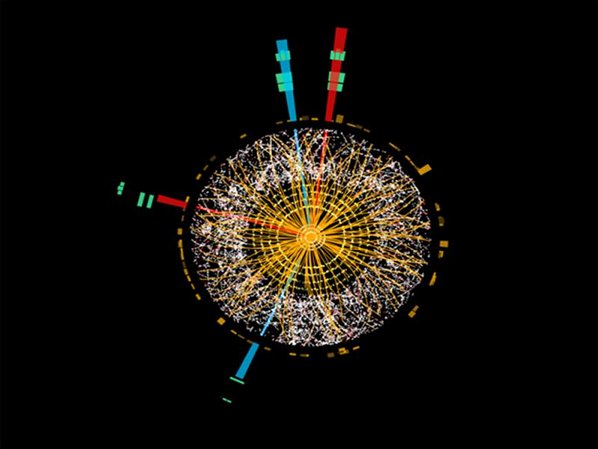 Candidate Higgs boson event from collisions in 2012 between protons in the ATLAS detector on the LHC. Image: ATLAS/CERN [1]

These things thou must not disclose to any of the uninitiated, by whom I mean those who cling to the objects of human thought, and imagine there is no super-essential reality beyond; and fancy that they know by human understanding Him that has made Darkness His secret place. And, if the Divine Initiation is beyond such men as these, what can be said of others yet more incapable thereof, who describe the Transcendent Cause of all things by qualities drawn from the lowest order of being, while they deny that it is in any way superior to the various ungodly delusions which they fondly invent in ignorance of this truth? [2,3,4]

“But in this world of Being the particular and the universal aspect of things must be mutually distinguished. Otherwise there could, on the one hand, be no things, and on the other, no bond of unity between them. Hence, when the Super-Essence overflows in the act of creation, It runs, as it were, into the two main streams of Universal and Particular Being. Neither of these two streams has any independent or concrete existence. Taken separately, they are mere potentialities: two separate aspects, as it were, of the creative impulse, implying an eternal possibility of creation and an eternal tendency towards it, and yet not in themselves creative because not in themselves, strictly speaking, existent.” [4:8]