The 26th Annual RESER (The European Association for REsearch on SERvices) Conference. What’s ahead in service research? New perspectives for business and society. 8-10 Sept. 2016, University Federico II of Naples, Italy. 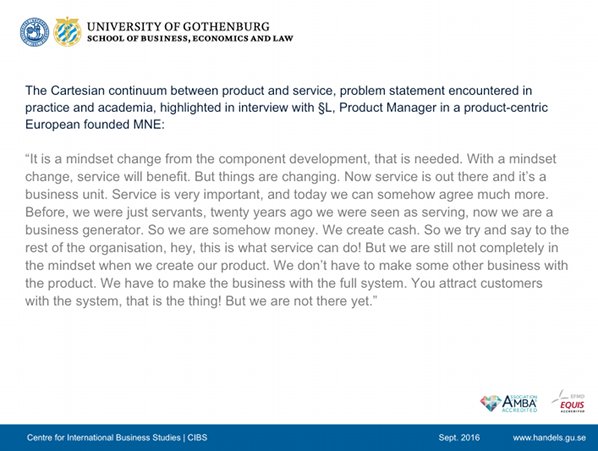 The idea behind this paper came about from a meeting with a product manager who works in a traditionally product-centric multinational enterprise (MNE), who seemed to struggle with the idea of what he deemed as a need for a mindset change within the enterprise in order for it to benefit from the increasing amount of time spend on services for customers on top of just hardware product innovation and hardware sales. So that got me thinking about what I think is already well known in services research and that is the sliding continuum of product and service. In practice, as what can be seen in this particular MNE is that a lot of the organizational infrastructure from software supporting product sales to customer service maintenance contracts is still written in a manner that sees a more Cartesian divide between what is product and what is a service. In such an instance, finding a business model, a revenue stream becomes increasingly difficult with greater internet connectivity because then all work becomes hidden, noticeable only when something breaks down and you need to interface with someone for the realization that there exists support. 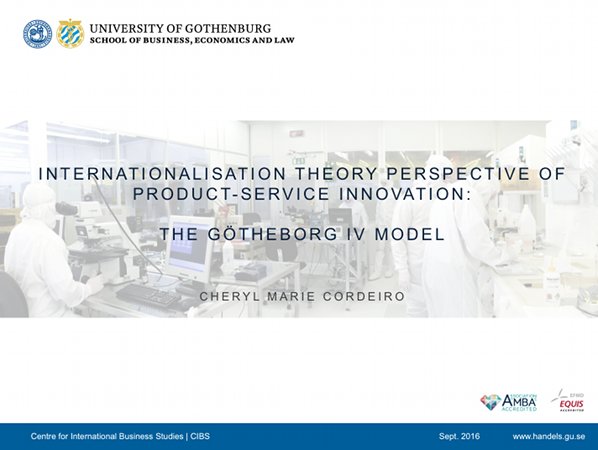 Because of the global presence of the MNE, the capacity and ability for the enterprise to alter its mindset and make clear the boundaries (or even if there are any) between product and service will affect the success of its global product-service chain. It is also fairly agreed upon in research findings that the continued success of a traditionally product-centric MNE in the context of increasing digital interconnectivity depends upon its being able to grasp and apply diverse types of knowledge.

So it is this global effect that I thought to approach the discussion about the distinguishing of product-service continuum from a firm internationalization theory perspective. 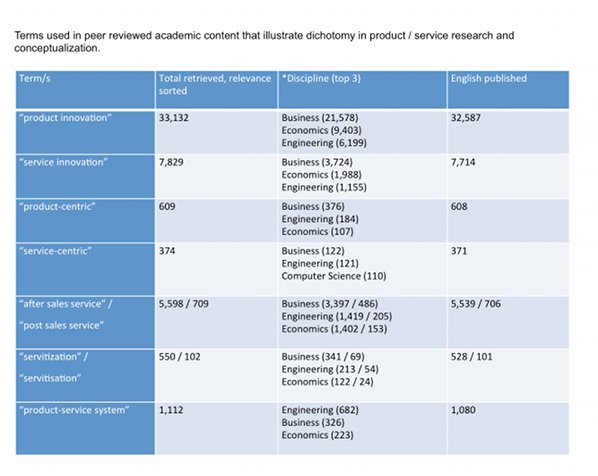 In academia, this continuum of Cartesian product-service definition and conceptualization is seen in for example, a keyword search for articles relevant in the field of services innovation studies.

This table illustrates the dichotomy in conceptualization in product / service research. Perhaps out of necessity too because journal publications are indeed extremely specialized in topics, most creating a niche, distinguishing themselves from other journals, thus creating a silo knowledge which is both advantageous and disadvantageous depending on perspective.

Still, a scientific journal database search from a university resource using keywords such as product, service and innovation will generally render these results that academic research continues to be product-centric heavy, with product innovation being studied much more than service innovation. And that sales is often considered service, yet there are other aspects to services than sales, and that the emergent trends are the study of servitisation, with relative newcomer concept of product-service system.

And it is also this fairly young realization of ‘product-service system’ that I thought to address with internationalization theory in the study of service innovation. 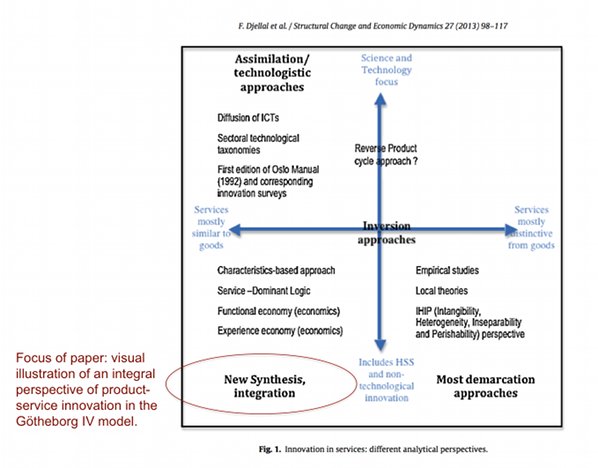 The services innovation literature has its foundations in economic theory with neo-Schumpeterian and post-Lancasterian influences in the technologist / assimilation, service-oriented / demarcation and integrative / synthesizing frameworks.

The perspective of internationalization theory on product-service is complementary to the schools of thought predominantly found in the service innovation literature illustrated in this four quadrant model by Djellal, Gallouj and Miles (2013), and therein perhaps lies the novelty in terms of conceptualization of ideas around this topic of discussion where one could say that the interest is in addressing the lower left quadrant working towards modeling a framework of perspectivising the synthesis and integration of product-service. 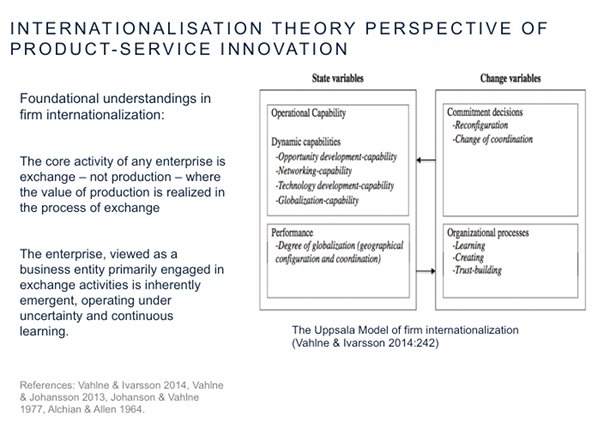 There are some foundational understandings of firm internationalization theory that is applied here, and they include viewing the business entity as primarily engaging in exchange and not production. The value of production is realized in the activity of exchange.

The second understanding is that the enterprise is a living entity that evolves through time. It is inherently emergent, and it operates under conditions of uncertainty and continuous learning.

These foundational understandings are what forms one of the more widely cited and applied theoretical frameworks in understanding firm internationalization – the Uppsala Model – launched first in the late 1970s and shown in a 2014 publication to the right of the slide. 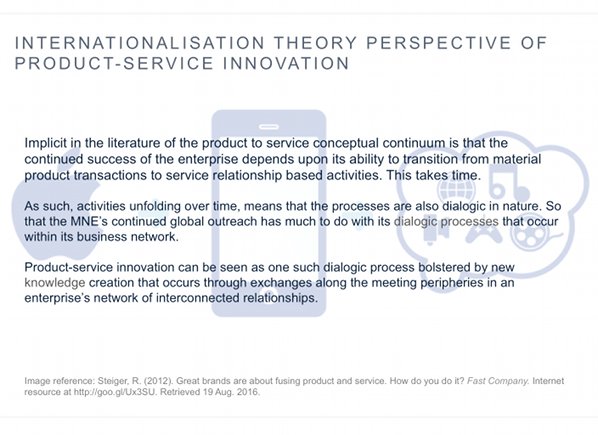 What is inherent in the literature of product to service is that the continued success of an MNE is quite dependent upon its capacity to manage effectively, this transition from being product-centric to service relationship based activities.

And if we’re looking at product-service innovation as an activity, what can then be understood is that the continued global competitiveness, the extent and strength of enterprise influence depends much upon the dialogic processes bolstered by new knowledge creation. These exchanges usually occur along the meeting peripheries in an enterprise’s network of relations. 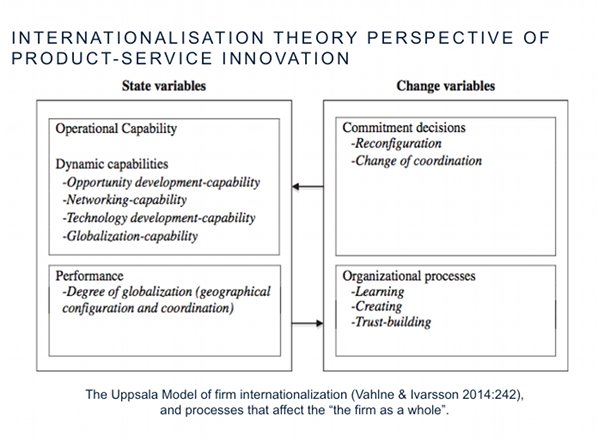 Going back to the Uppsala model or the UM of internationalization and how might this model be used to support studies of product-service innovation from a synthesis perspective?

The UM was developed first during the 1970s with data gathered from empirical studies of Swedish MNEs. Its purpose was to explain the internationalization process of the firm under conditions of uncertainty and bounded rationality. What is more interesting in this case are the ideations behind the Uppsala Model.

In this you have the bi-directions of (i) increasing involvement of the firm in a foreign country, and (ii) the successive establishment of operations in new countries. 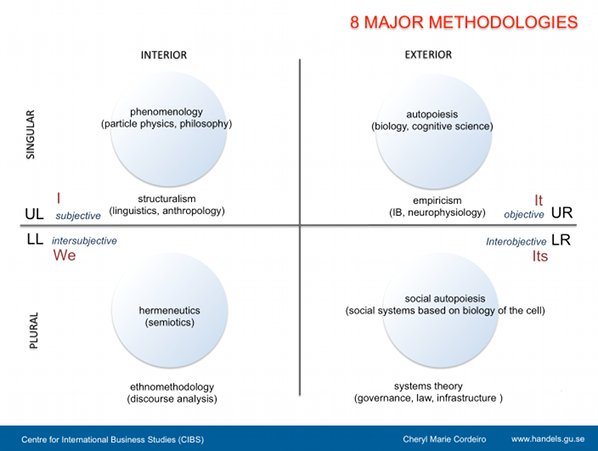 Because product-service innovation depends upon the dialogic processes of new knowledge creation, and if the enterprise’s main engagement is the exchange of activity, then it would be useful to map the different types of knowledges that are needed for this exchange.

And it is here that through the application of the deictic (or pointer / referral words) use of Pronouns in language that the Götheborg IV (G4) model comes into relevance. The G4 model can be described as an applied linguistics perspective on the elements that comprise the Uppsala Model.

About 75% of the world’s languages use referent words that distinguish between subject, object and verb that can be unfolded into giving you the different perspectives of any contextualized event or process. It is also these referent words in language that gives us the 8 major methodologies that we find across all academic disciplines from the study of natural science to social science. The examples that appear in is four quadrant model of major methodologies is neither exclusive nor exhaustive. You’ll find that while certain disciplines might tend to favour certain types of methodologies, you will find combinations of methodologies across disciplines. These four quadrants will represent different types of knowledge zones all contributing towards the overall scientific paradigm, and body of scientific knowledge. 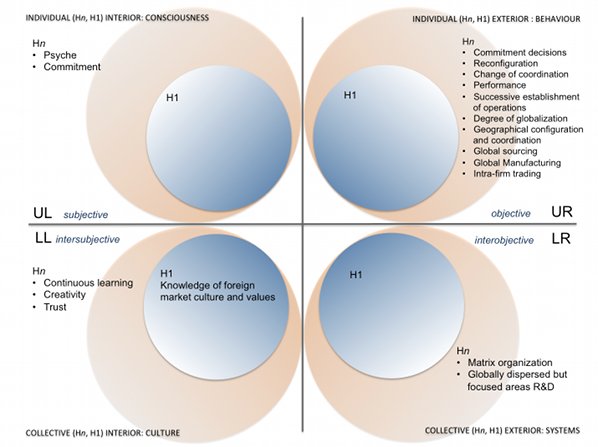 Applying this deictic function in language unto the processes of firm internationalization and the Uppsala Model, you’ll get the Götheborg IV model.

Apart from the application of the deixis onto firm internationalization processes, the G4 makes explicit the distinction between ‘enterprise’ labelled as H, and ‘subsidiary firm’ labelled as H1. The network of subsidiaries within a single MNE (H) could be any number, denoted by Hn.

The distinction is implicit noted in the Uppsala Model because an internationalizing firm is necessarily one with a network of foreign subsidiaries, but here in the Götheborg IV model, this is made visually explicit.

All elements that are in this slide, comes from the empirical findings of the Uppsala Model. Time in the G4 model is taken as embedded in the context of firm evolution and development. All processes take place in the unfolding of Time. So what has been distinguished as State or Change variables is seen as taking place in and through Time in the Götheborg IV model. So Time as such is not listed in any quadrant, it is rather considered the spacetime (contextual) fabric in which all events unfold. 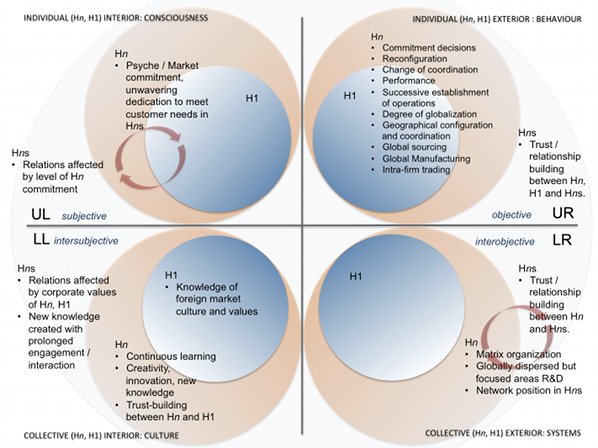 This visual unfolding is important because dialogic processes can also be visualised, seen at the edges of a singular subsidiary and its network boundary, or seen between enterprise and its subsidiary boundary. By doing a project time-line analysis for example, or an enterprise study, and filling out the different perspectives and methods used, the G4 model helps identify the various knowledge gaps. Meaning to say, it can be applied to the tracing (and the study) of where most or most often, product-service innovation is taking place in the enterprise as a whole, even in relation to the enterprise and its surrounding business partner network (illustrated in the Lower Right quadrant). 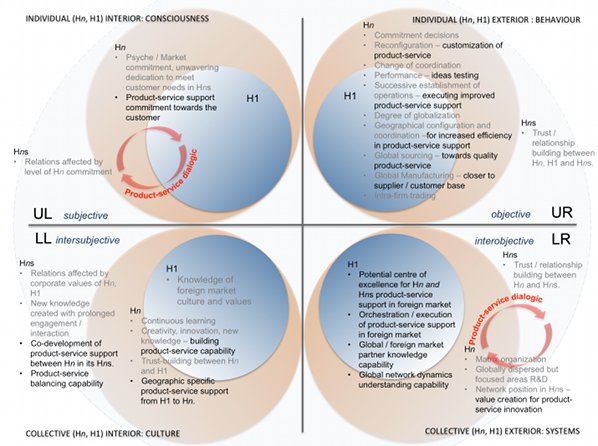 Combining the empirical findings of Swedish MNEs that made the foundations to the Uppsala Model, and the empirical findings from my own doctoral studies on Swedish owned / managed subsidiaries in Singapore that were usually headquarters for their East Asia and Asia-Pacific operations, this slide here shows the complementary types of knowledges filled in, and where product-service innovation in this context, has occurred.

The findings from the UM are in grey print, and new knowledge from Swedish MNEs subsidiary operations in Asia are in black print. 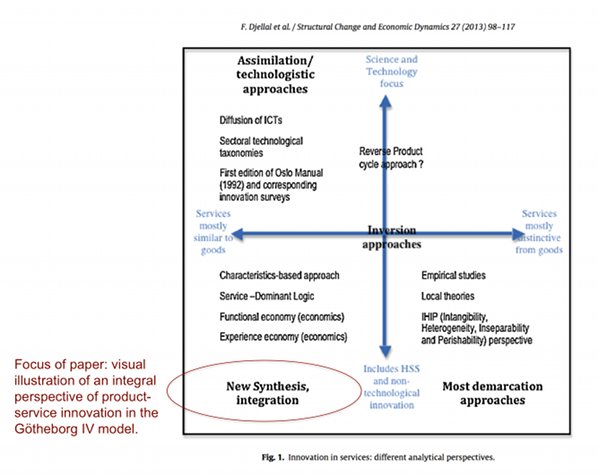 The Götheborg IV model is a visual representation of firm internationalization processes that is perspectivised by application of the deictic function of words. By doing so, one can not only locate various knowledges present but what uncover what knowledge gaps to be filled. By designing a corresponding research framework to do a deeper enterprise analysis, product-service innovation can be identified in its context/s of occurrence. 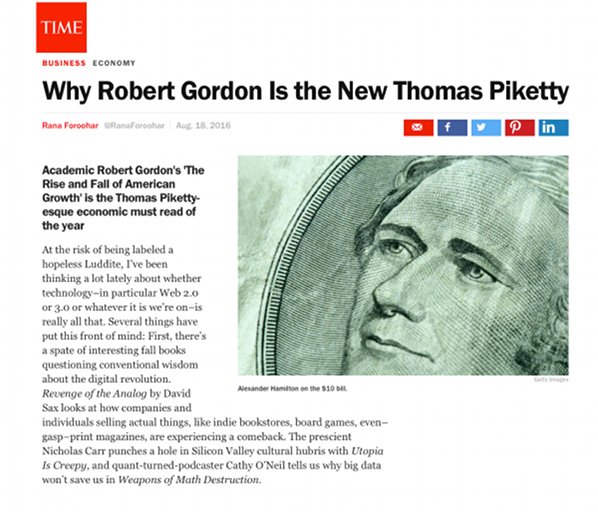 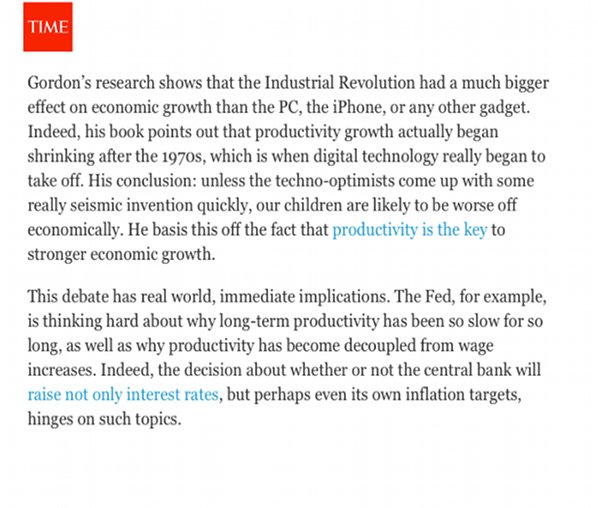 Prominent in current economic discussion are the uncomfortable issues raised by Robert Gordon’s book entitled “The Rise and Fall of American Growth”. One of the issues raised is why economic productivity is decreasing even with the onset of digital technology. The idea being that digital technology had not delivered economic productivity as the Industrial Revolutions of the 1800s and 1900s did.

But digital technology is what is driving the increase in services, both in terms of a transitioning industry and innovation. We also know that services is difficult to measure for reasons entrenched in economic theory perspective. So could it be that all factors considered, the measurement of what is economically productive needs to refocus and be re-perspectivised? Because what is measured depends much upon what you look at to measure.

At the moment, much of services remain invisible and difficult to account for. 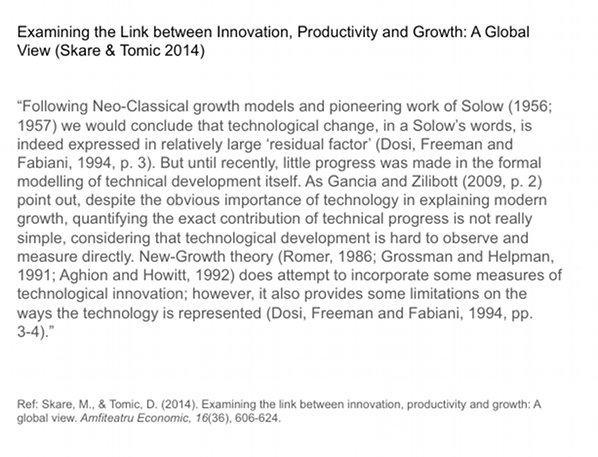 The theoretical modelling and empirical measuring of productivity based on technological innovations has been acknowledged, with scholars currently addressing the issue, as reflected in the study by Skare and Tomic in 2014. They had their own econometric model to share that indicated that digitalised technological development of main innovation industries contributed highest in long-run growth of GDP and of labour productivity in the observed period. And that this was also incorporated into the improved standards of living of the countries that in turn continued to determine future growth. 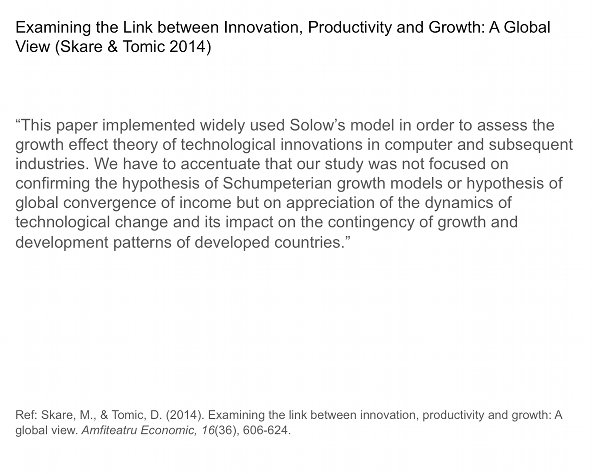 What they did different was to re-perspectivise Solow’s model in relation to the Schumpeterian growth models and models of global convergence of income. 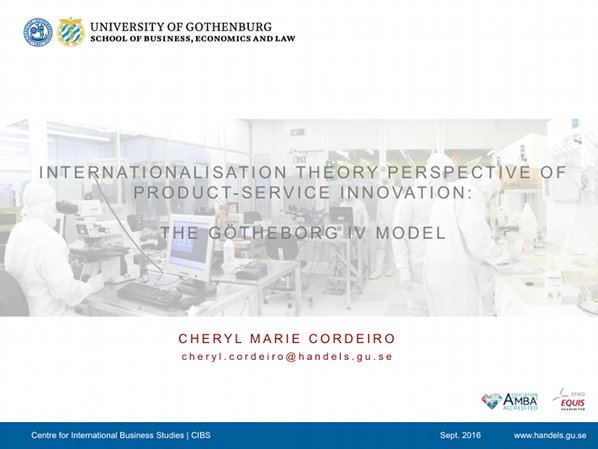