“A common DNA”. EU-ASEAN relations as actors in regional integration: a discourse analysis of organisational relations from a co-evolutionary perspective

The EU and ASEAN have often been described as “natural partners” that share a “a common DNA” [1]. This biological metaphor that when used, calls to mind Darwinian evolutionary theories of natural selection and the study of genes in organisms, has been heard in various public addresses from various individuals such as EU Ambassador Julian Wilson to Belgian Deputy Prime Minister and Foreign Minister Didier Reynders.

The words were used as a metaphor for describing and laying the foundations to the relations between EU and ASEAN, acting upon the assumption that it is more facilitative to build a relationship based on perceived similarities than differences. It is also perceived that the EU and ASEAN have parallel agendas towards common destinies [2,3]. These commonalities include sharing a forty year friendship in cooperation on a broad tri-pronged effort of bringing (i) peace to the people of the region to (ii) creating a stable economic platform for more efficient trade within and between the regions and (iii) ensuring working security policies all with a multilateral approach can be found in several official documentations.

But their regional integration efforts are not without challenges where it has been voiced that the EU is not an ideal model for ASEAN to follow [4].

Applying theories at the intersection of applied socio-linguistics and psychology, this conceptual paper approaches the challenges faced between EU and ASEAN as regional actors from a socio-cognitive perspective.

This study that I did revolves around EU-ASEAN relations, each as actors in regional integration, where they have been described as having “a common DNA”. And this metaphor is often used in the context of the EU helping ASEAN achieve certain milestones in their ASEAN 2015 Community Vision or project.

Metaphors help orientate our mind’s visual representation of meaning. My curiosity for this metaphor, “a common DNA” resulted in the title of this study as coming from a “co-evolutionary perspective” to their relationship, based on a socio-cognitive perspective.

The metaphor came about when reading official speeches released by ASEAN and the EU. Metaphors can be seen as linguistic tools that help name and capture the essence from which it was derived. “A common DNA” tries to capture in essence the biological, evolutionary and material physicalities of the relationship between two regional actors. Their relationship is also one that is co-evolutionary. Their relationships is one defined as being committed to each other in a relationship of help and learning from each other.

But what perhaps is more revealing than what is being described through the use of metaphor as foundational similarities for a relationship, is what is not being described. That despite this “common DNA”, that there seems to exist a heavy asymmetry involved in the relationship between the two entities grounded in each region’s history and identity that eventually had a concrete result of the non-existence of the EU-ASEAN FTA.

You could take the lacking of an existing EU-ASEAN FTA as an example of the present asymmetries, where common reasons cited are “lack of negotiating capacity”, “different negotiating machinery”, “lack of political will” and then citing Burmur / Myanmar as also the main reason.

There has also been an identity forming voice from the ASEAN side. Talk about “the ASEAN way” where ASEAN had specifically voiced that the EU was not a good model of development for it to follow in terms of regional integration.

And while it is that the EU is far from being integrated, and there has been a lot of discussion about that, a ‘fragmented EU’, compared to other regional actors, the EU remains in the forefront of efforts and results. So to that extent, regional integration is rare outside of the EU and ASEAN could be said to be ‘most advanced’ in its efforts.

52 official transcriptions of speeches and documents from the EU and ASEAN websites were analysed for this study. The method is described in the paper itself, where 3 text examples were chosen of the 52 documents as illustration to ASEAN’s perspective towards the EU.

Discourse analysis, specifically Systemic Functional Linguistics (SFL), was used as a framework of content analysis. SFL offers a systematic way in which you can analyze the texts studying language from a functional perspectives. This is useful in order to uncover how organizations construct their own identities, their realities and negotiate between themselves.

The main question of interest in this study was, “Why and to what extent is the EU not a good model of regional integration for ASEAN?” despite this “common DNA”?

To the question – why use a co-evolutionary perspective (based on socio-cognitive development studies) to study EU-ASEAN relations?

Well, as Heisenberg once said,

“The same organizing forces that have shaped nature in all her forms are also responsible for the structure of our minds” (Heisenberg 1971:101)

I thought to approach this question from a socio-cognitive development perspective, applying a combination of language analysis and consciousness theory and models in understanding of the challenges faced by both the EU and ASEAN as regional actors because these models are complementary to the purely economic, financial models that we more often encounter when speaking of EU-ASEAN relations. It’s an attempt to account for the greater social contexts in which these supra-organizations are embedded.

But there are more such cognitive development theories. One of the more comprehensive cognitive development theory and comes from the work of Clare Graves (1950s to 70s), a contemporary to Maslow (1940s to 60s) and who did much of his work after Maslow’s. His work is now reflected in a more modern version called “Spiral Dynamics” or SD. And it would be SD that has this colour coding you see to the left of this table here.

In this study, these models and theories were aligned as a matter of gaining a broader framework within which to work. Shown here in this table is a combination of various cognitive development theories and models, four of them here put side by side to see how they compare in terms of levels of consciousness development. They might have different wordings for each level of existence, but they all seem to point towards a certain development path.

The idea is that organizational consciousness is central to its success in pursuing its mission, expressing its values and defining itself in a clear / coherent manner. And while some scholars describe consciousness as the “un-discussible elephant in the room” [5], these models shown here, together with the work of studies analysing language in use, indicate that one can study consciousness as expressed in language. How individuals perceive and then reflect what they understand through a process of semiosis, in a constant construct of reality via language, is an expression of an individual’s consciousness.

So cognitive development theories and models can lend a novel perspective in organizational analysis and behaviour. In the study of supra-organizations such as the EU and ASEAN, such theories and models might help us conceptualize and deepen our understanding of regional asymmetries and explain the existing gap between rhetoric and action in regional integration efforts.

I understand that in this audience of economic and financial backgrounds, you’d perhaps be more familiar with the work of Abraham Maslow. So there, you will have some foundational knowledge to the work of Clare Graves who was contemporary with Maslow.

I will explain here only briefly about the Gravesian theory and model of cognitive-development. A more detailed explanation can be found in the paper.

Graves’s model has 8 levels of existence that is deemed as open cyclic and emergent systems that come to be as a result of an interaction between internal cognition and external environmental factors. The path of evolution is such that each new level of cognitive development necessarily encompasses and overrides the system below it. But cognitive processes are fluid, open and emergent in nature, so at any point in time, under certain pressures, you might even regress into a lower level order, before further development or evolution.

At the most basic level in Gravesian theory is also that of Maslow’s, the physiological needs.

Because this study looks at the relations between the EU and ASEAN, the analysis of the 52 texts focused mainly on the interpersonal metafunction of meaning with the following three tools:

(i) Tenor – ‘kinds of role relationship’, how ASEAN view itself in relation to the EU is reflected in language use.

(ii) Appraisal – this looks at language that expresses attitude and degree of engagement.

(iii) Semantic nesting – the collocation of words as they are used in context that overall express a certain ideology.

The results pointed towards that the values of the EU were banded in the green to turquoise range (in SD) whilst the ASEAN which was relatively younger in formation, was banded towards the red to orange (in SD) range of values. These bandings of values are relevant only to the extent when taken as supra-organisational averages, not as national specifics.

Still, with these broad differential bandings of values come a theory from a socio-cognitive perspective as to why challenges might be faced within EU-ASEAN negotiations. The challenges of which can manifest itself at various levels of negotiations, based on differing world perspectives set within differing contextual goals, on different time-lines. 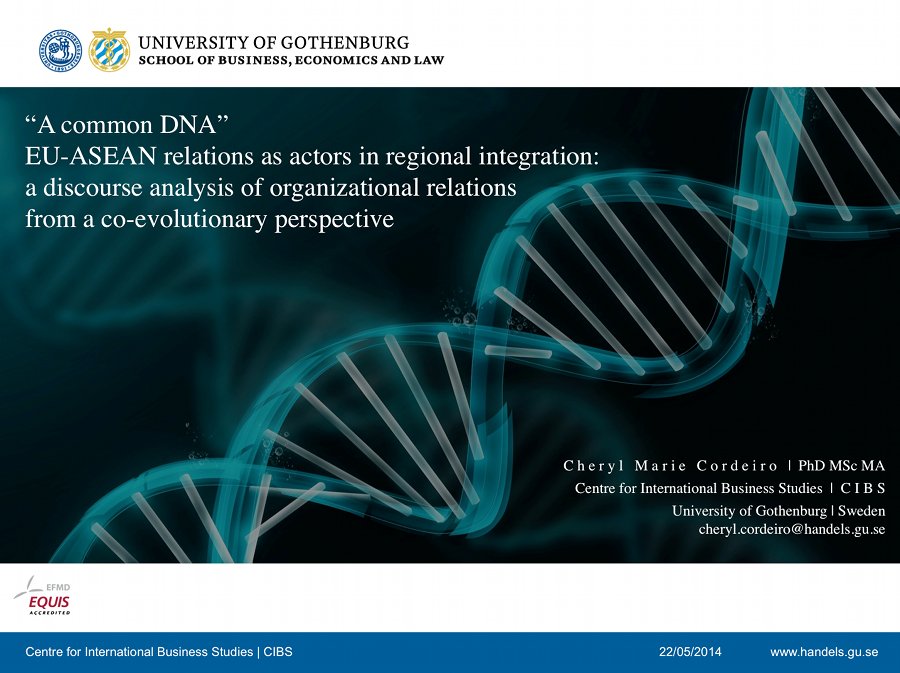 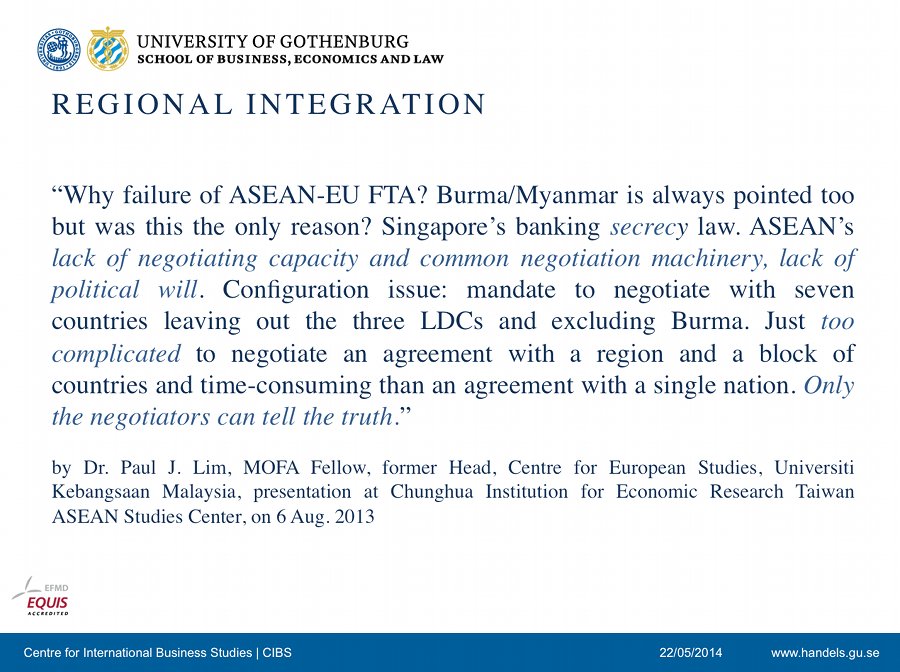 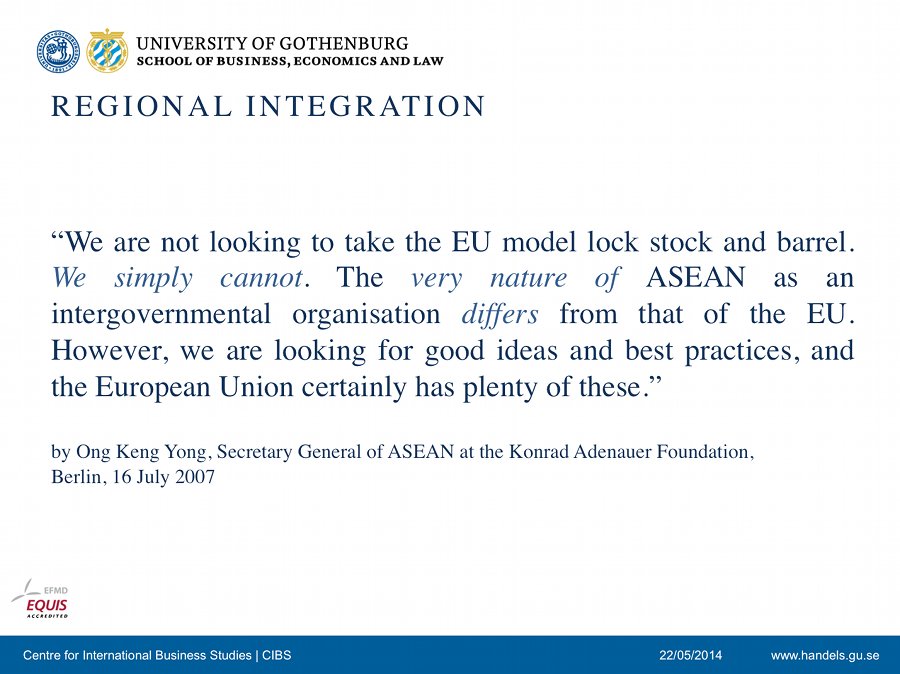 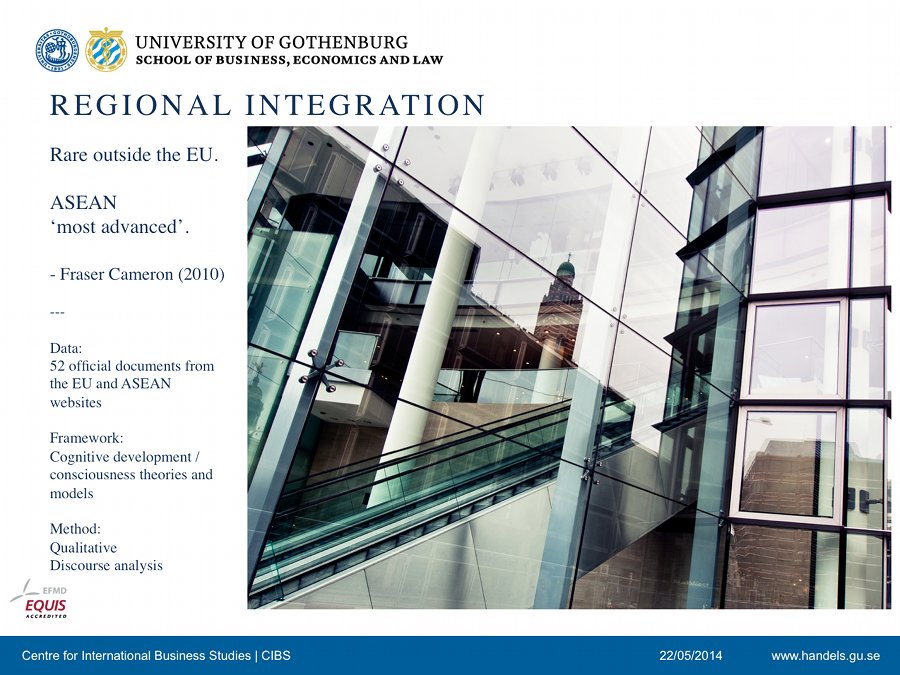 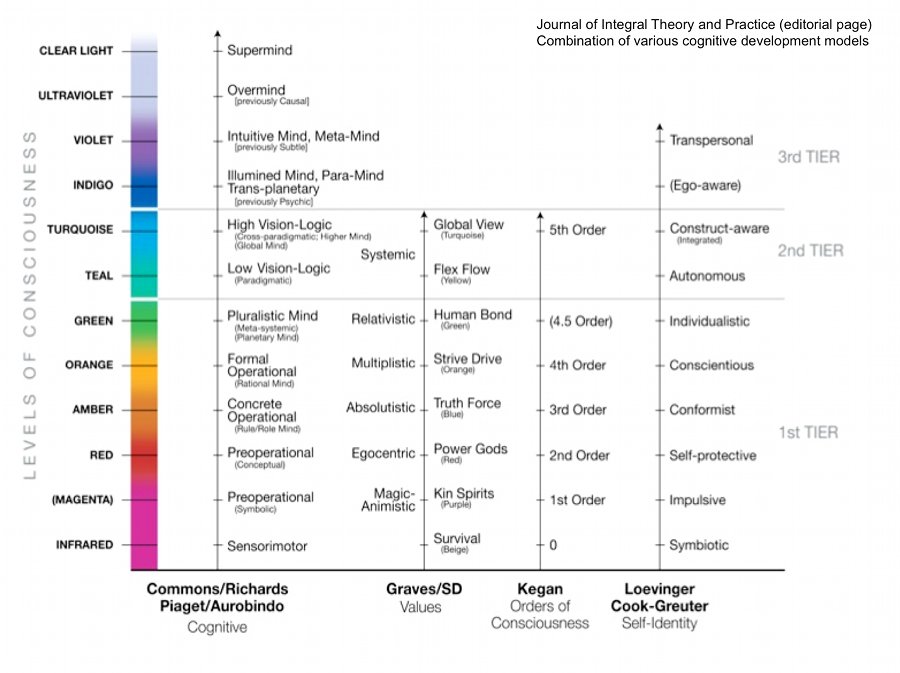 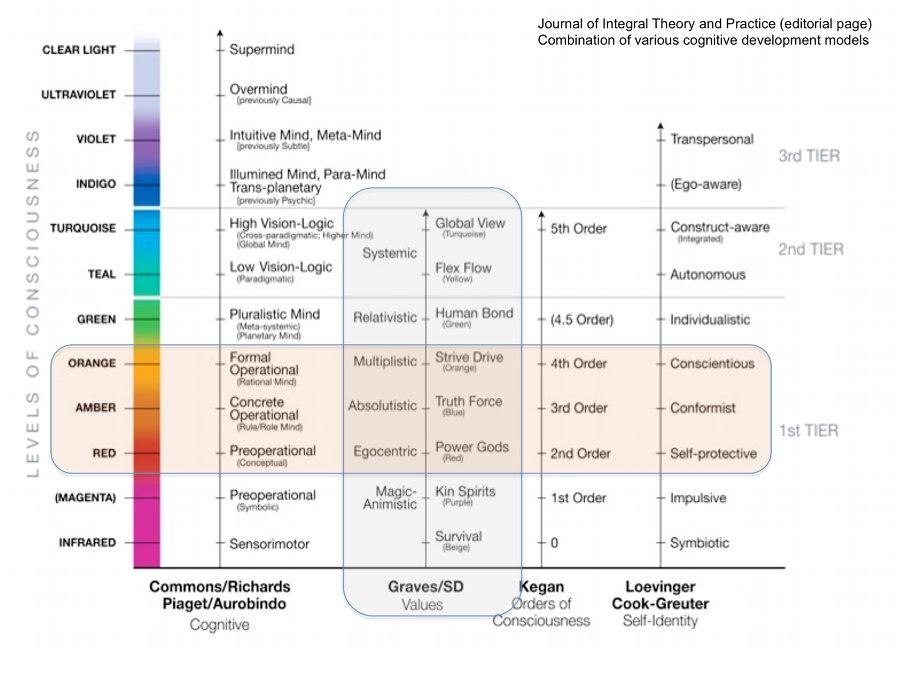 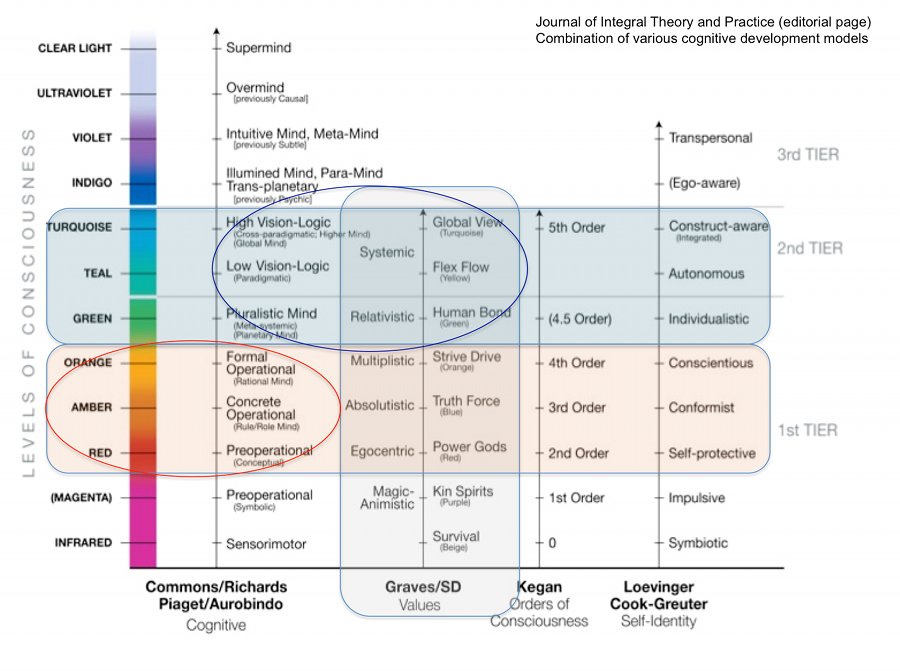 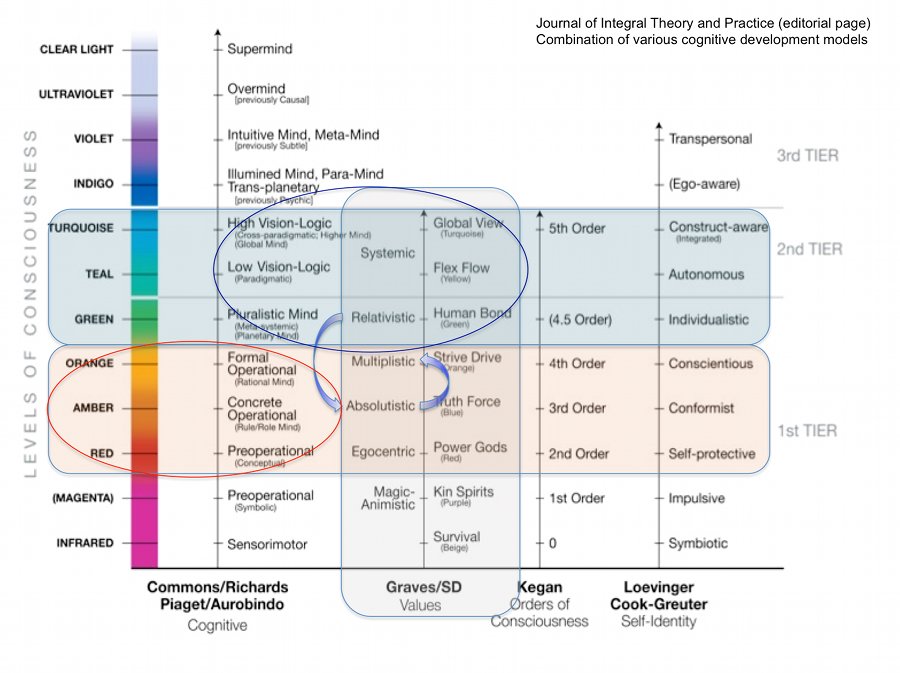 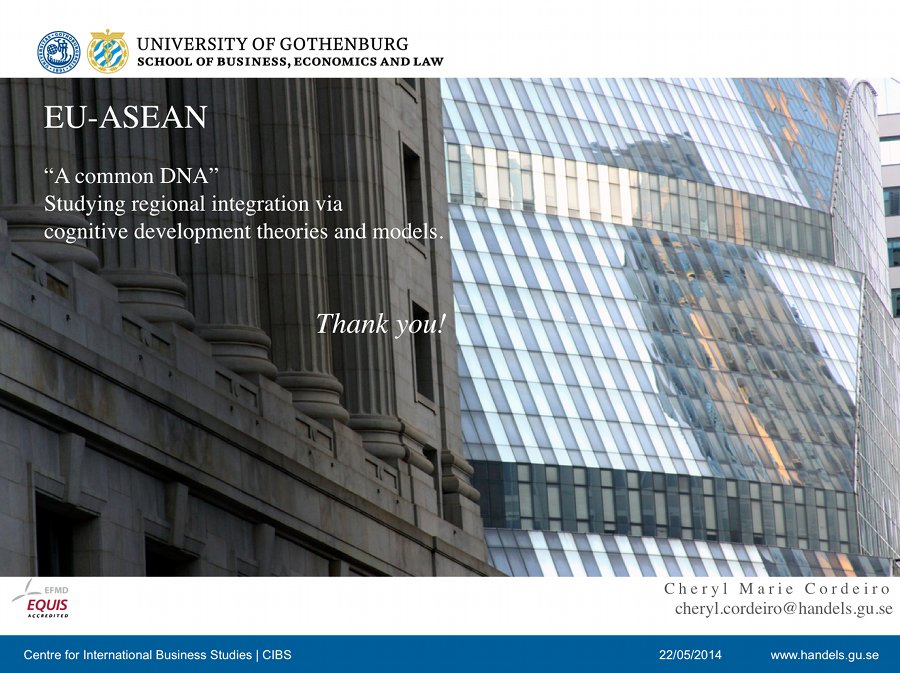 [4] Ong Keng Yong, 2007. Forty Years of ASEAN “Can the European Union be a Model for Asia?”, on Thursday, 26 July 2012. Posted in Speeches & Statements of the Former Secretaries-General of ASEAN. Talk by the Secretary General of ASEAN at the Konrad Adenauer Foundation Berlin, 16 July 2007. Internet resource at http://bit.ly/1xOj1bI. Retrieved 2 April 2014.