Geely HQ and Cixi Assembly plant
Friday the 15th of November was the fifth day of our visit to Shanghai in 2013. We had focused quite some on the Chinese automobile industry and today it was time to meet with Geely. Both the Geely Cixi Assembly plant and the Geely Headquarters are located in Hangzhou, Zhejiang province, a few hours drive inland, from Shanghai. 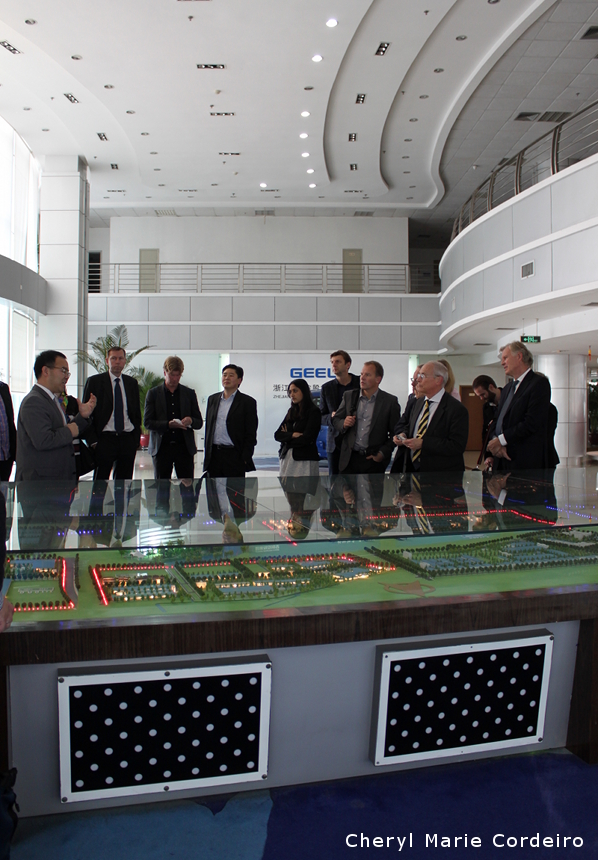 Geely’s PR Director, Victor Young (left), introduces us to a brief history
of Geely, at the reception hall of its headquarters.

Back again after three years
About three years had passed since my last visit to the Geely Headquarters in Hangzhou. It was interesting to meet again with Mr. Victor Young, Director of Public Relations, and his team. It was notable from his engaging presentation that the organisation had developed. The milestones the company had touched in the past years were impressive, to say the least. 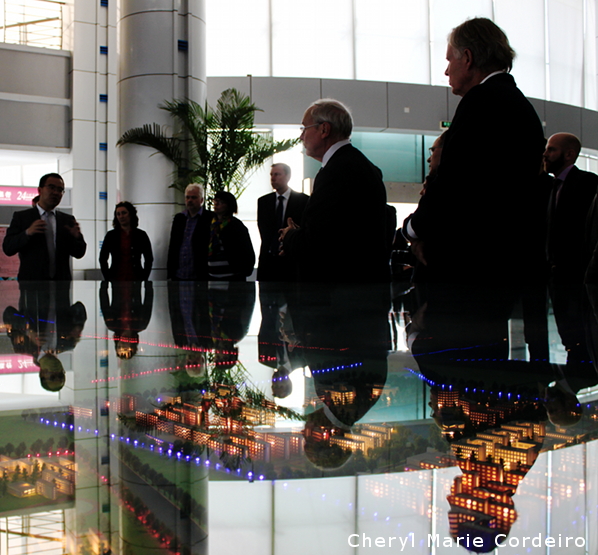 Geely organisational strategy
Internal management practices and policies of Geely has not as yet received much attention in western media but appeared well adapted to the situation in China. Considering the country’s vastness, and that the socio-economic fabric does not develop at equal pace across the country, it gave an interesting insight into modern organisational management philosophy, human resource development, as well as ideas on how higher education might be organized in the future to fit the needs of an ever changing business environment. 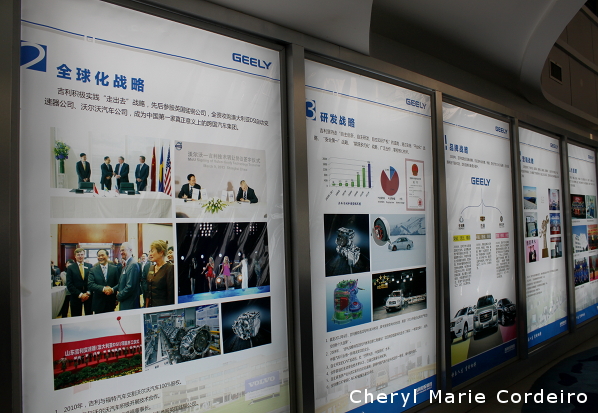 “Let Geely be a widely known brand throughout the world” – Geely Holding Group presentation, Nov 2013. Milestones of Geely through the years since 1986.

Continuous string of rapid changes
The Chinese society is characterized by continuous string of rapid changes and transformations with both global and domestic effects. A challenge that many developed countries are facing now, is one of an aging population. In China, with several global cities, the problem is a complex one, compounded by the one-child policy, currently under review, which has had a disturbing effect on the Chinese “population pyramid” as in the general age distribution. 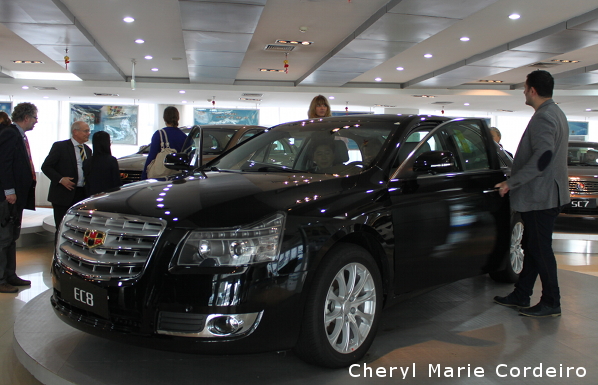 Launched in 2009, Geely’s Emgrand, literally “imperial brand” is one that is used today as official government cars in some countries, and it is one of the most talked about for having achieved impressive standards in air quality control.

The workforce average in their 20s
Geely’s workforce that are employed in their assembly factory, we were told, is on the whole very young. Most being in their 20s. The up side of this is that they will be very open minded about how things should be done. On the other hand, the need for training and education would be very pronounced. However, due to the quick changes in technology that in turn induces a lifestyle and values change, there is very little experience to fall back on, leaving a widening generation gap. Current employee turnover rate also tends to be very high. 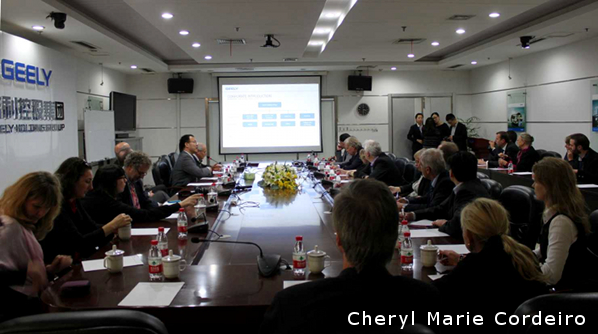 Mr. Victor Young goes further into Geely’s corporate introduction, speaking on its talent and education strategies for employees and of its synergistic working relations with acquired Volvo Cars, especially in the area of technology research and development.

Numerous factors contribute to an overall adaptive and flexible organization where constant change is almost the one thing that could be taken for granted. A society in transition and transformation is a feature that characterizes China. Improvement and growth is expected to arrive fast and in great measure. 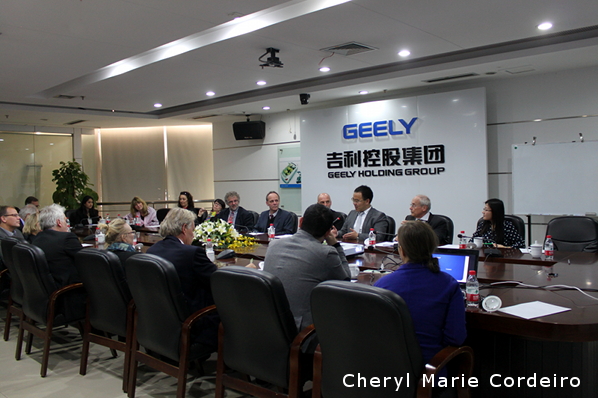 Managing of uncertainties
Geely focuses much of its efforts too in the managing of uncertainties. Being at the forefront of several sectors in China’s automobile industry they often find themselves alone with no road map to follow, and are left to carve out their own route in a spirit of entrepreneurship. It was also interesting to hear how the company constantly was balancing the entrepreneurial necessities of fast and decisive actions towards the corporate long term strategies. 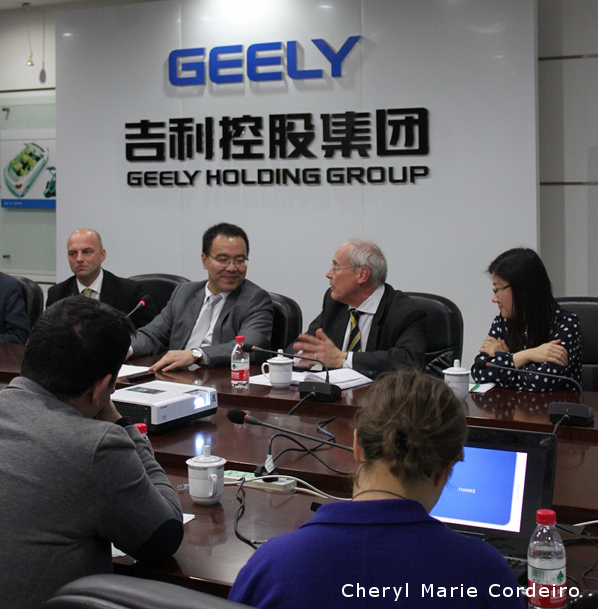 Numerous avenues of research interest
The questions brought up suggested numerous avenues of interest needing research in terms of studying not only Volvo Car’s relations with Geely as the latter’s 2010 acquisition, but even more so how Geely themselves are managing, developing and adapting to the local and international scene. Many questions that were brought up three years ago were also still found to be relevant. 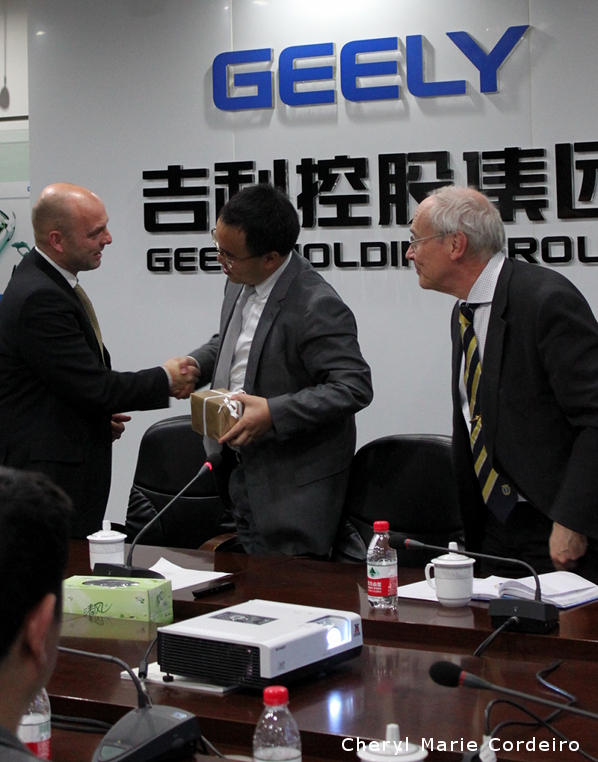 Future development in R&D
On the R&D side, Volvo Cars and the Zhejiang Geely Holding Group has now established a China Euro Vehicle Technology (CEVT) R&D center in Gothenburg, Sweden, with a soft launch in September 2013. The management and development of which is keeping many in the R&D field, awake and interested. 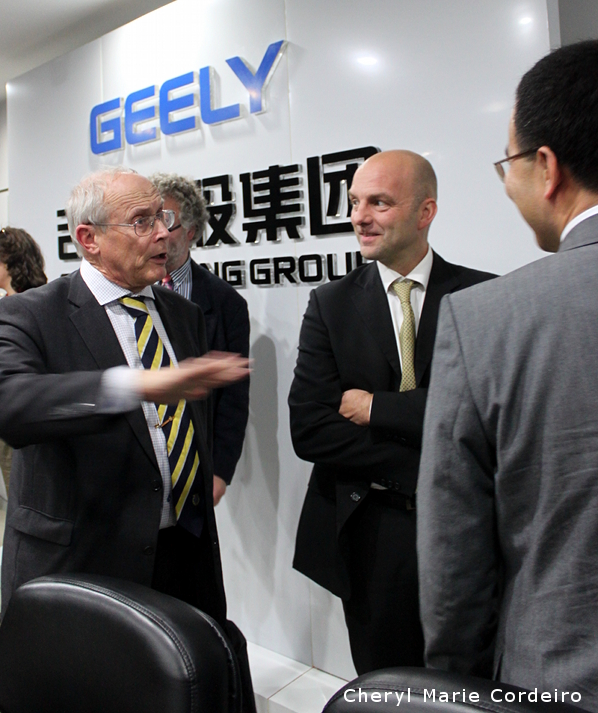 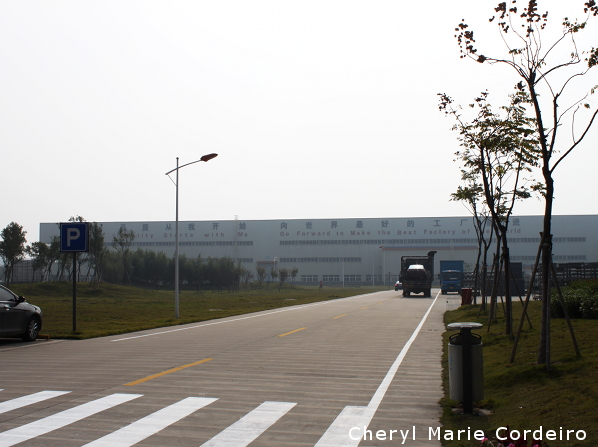 “Quality starts with Me. Go forward to make the best factory of the world.”
Geely’s Cixi plant, Hangzhou. 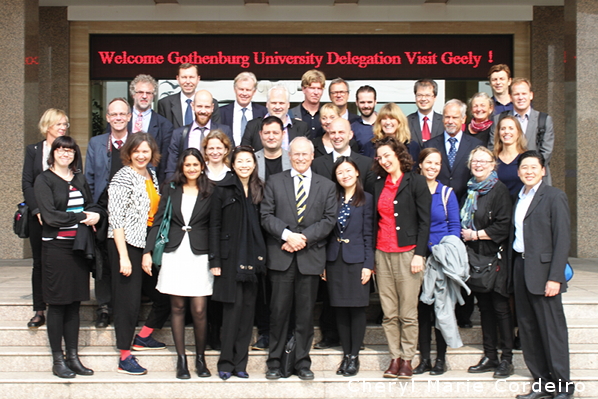 At Geely’s Cixi assembly plant.
Faculty members of Management and Organisation with the Centre for International Business Studies (CIBS), School of Business, Economics and Law, University of Gothenburg. Our visiting delegation had Professor Claes G. Alvstam and Professor Ola Bergström as heads.