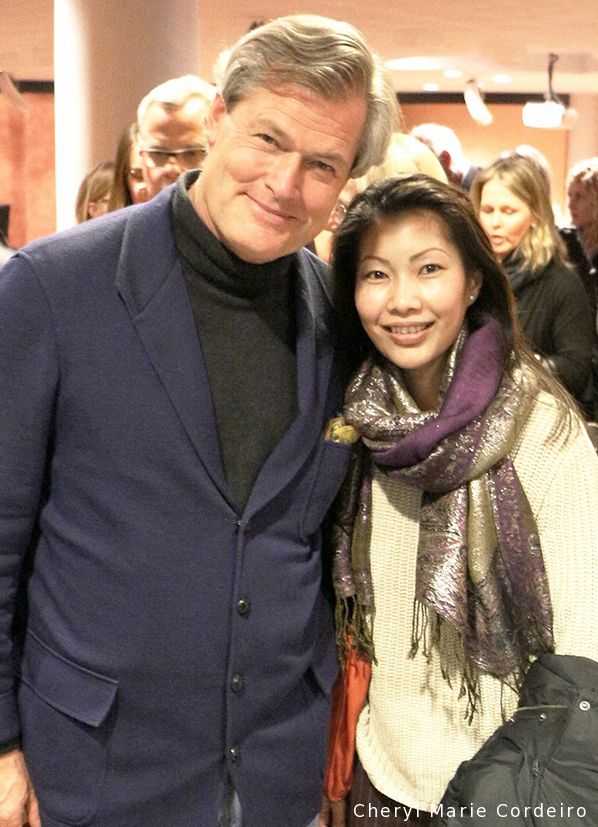 Gunter Pauli, with Cheryl Marie Cordeiro.
Gunter Pauli is author of ‘The Blue Economy’ and initiator of the Zero Emissions Research and Initiatives (ZERI) network that began from 1994. ZERI was based first at the United Nations University (UNU) in Tokyo, as a network of 3000 scientists searching for pragmatic solutions to poverty, climate change and competitiveness. It targeted redesigning production and consumption into clusters of industries inspired by natural systems. Pauli was in 1992, CEO of Ecover, where he built the first zero emissions factory for detergents out of wood. He has an honorary doctorate in economics from the University of Pécs, Hungary.
Text & Photo © JE Nilsson, CM Cordeiro, Sweden 2016

In 1976, Fritjof Capra, Ph.D, a Vienna-born physicist and systems theorist published The Tao of Physics [1] that explored the way in which modern physics was changing our world perspective from mechanistic to holistic and ecological. It was this underlying influence of systemic thinking and modeling of thought I was interested in when given the opportunity at the School of Business, Economics and Law at the University of Gothenburg, Sweden, to meet with two distinguished individuals belonging to the realm of systemic thinkers and activists in an evening of lectures – Gunter Pauli, author of The Blue Economy [2] and founder of the Zero Emissions Research and Initiatives (ZERI), and Göran Carstedt, Assar Gabrielsson Professor of the School of Business, Economics and Law at the University of Gothenburg and founder of The Natural Step, specialising in leadership for a sustainable future [3]. Carstedt is also known for one of the few lecturers who fluidly connects theories of quantum physics to social sciences and to the study of organization transformation.

Looking at the life experiences and works of both Pauli and Carstedt, what could be described as a common characteristic between them is that they are individuals who are able to transform the ideologies of sustainability into material action. While this might be a movement that will take momentum in the next few years in terms of how society organises itself, putting ideology into action takes time and may not at first come around without some resistance. I was once told in the context of a roundtable discussion on environmental awareness in Asia that Europe was rather idealistic in their ways when it comes sustainability because they (in Asia, at the time) saw no way out of the current business paradigm that made them take decisions that they knew would continue to ruin the environment in the long run.

Listening to Pauli and Carstedt, I was very much reminded of Fritjof’s work from the 1980s on how one could put into material action more holistic and ecological thinking that Fritjof calls Systems Thinking. Fritjof outlined three criteria for Systems Thinking framed in the discourse of particle physics [4:475-6]:

“The first aspect of systems thinking concerns the relationship between the part and the whole. In the mechanistic, classical scientific paradigm it was believed that in any complex system the dynamics of the whole could be understood from the properties of the parts. Once you knew the parts, i.e. their fundamental properties and the mechanisms through which they interacted, you could derive, at least in principle, the dynamics of the whole. Therefore, the rule was: in order to understand any complex system, you break it up into its pieces. The pieces cannot be explained any further, except by splitting them into smaller pieces, but as far as you want to go in this procedure, you will at some stage end up with fundamental building blocks – elements, substances, particles, etc- with properties that you can no longer explain. From these fundamental building blocks with their fundamental laws of interaction you would then build up the larger whole and try to explain its dynamics in terms of the properties of its parts. This started with Democritus in ancient Greece and was the procedure formalized by Descartes and Newton, and has been the accepted scientific view until the 20th century.

In the new paradigm, the relationship between the part and the whole is just  the opposite. We believe that the properties of the parts can only be understood through the dynamics of the whole. The whole is primary, and once you understand the dynamics ofthe whole, you can then derive, at least in principle, the properties and interactions of the parts. This reversal of the relationship between the part and the whole occurred in science first in physics during the first three decades of the century, when quantum theory was developed. In those years, physicists found to their great amazement that they could no longer use the notion of a part – such as an atom, or a particle – in the classical sense. Parts could no longer be well defined. They would show different properties, depending on the experimental context, appearing, for example, sometimes as particles and at other times, as waves.

Gradually, physicists began to realize that nature, at the atomic level, does not appear as a mechanical universe composed of fundamental building blocks but rather as a network of relations, and that, ultimately, there are no parts at all in this interconnected web. Whatever we call a part is merely a pattern that has some stability and therefore captures our attention. Werner Heisenberg, one of the founders of quantum theory, was so impressed by the new relationship between the part and the whole that he used it as the title for his autobiography Der Tedl und das Ganze.

The third aspect is maybe the most profound of all three and the most difficult to get used to for scientists. It concerns the metaphor of knowledge as a building, which has been used in science and philosophy for thousands of years. Scientists speak about fundamental laws, referring to the fundament, i.e. the basis of the building of knowledge. Knowledge has to be built on sound and firm foundations; there are basic building blocks of matter; there are fundamental laws, fundamental equations, fundamental constants, fundamental principles. All this refers to the building of knowledge, for which we also use the German expression ‘Gedankengebiude’ (building of ideas). So, the metaphor of knowledge as a building with solid foundations has been used throughout Western science and philosophy for thousands of years.

In science, the foundations of knowledge were shattered, or at least were shifting, several times, and scientists often commented on that fact. Whenever major scientific revolutions were occurring it was felt that the foundations of science were moving. Thus Descartes wrote in his celebrated Discourse on Method  about the sciences of his time: “I considered that nothing solid could be built on such shifting foundations”. Descartes then set out to build a new science on firm foundations, but 300 years later, Einstein, in his autobiography, wrote the following comment on the development of quantum theory:

“It was as if the ground had been pulled out from under one, with no firm foundation to be seen anywhere, upon which one could have built.”

So again and again, throughout the history of science, there was a feeling that the foundations of knowledge were shifting, or even that they were crumbling. In the present time, the paradigm shift which is happening now, again evokes such a feeling, but this time it may be the last time; not because there won’t be any more progress or any more changes, but because there won’t be any foundations in the future.”

It has been some decades since Fritjof had published the criteria for Systems Thinking, where he went on to say that ‘knowledge as a building’ might shift towards the metaphor of ‘knowledge as network’. Observable in organization science is indeed the manner in which knowledge has developed and is utilised in terms of human talent within globalized organisations, where their functioning can certainly be described using the ‘knowledge as network’ metaphor [5,6]. But whether or not there “won’t be any foundations in the future” remains to be seen, since the foundations perspective could also take on a network metaphor, or if phrased in the discourse of physics – the wave particle metaphor – meaning to say that the foundations exist where you look for them. Because foundations will always be needed to build larger structures, whether you describe it in terms of holons in holons or the constitution of a larger organism based on smaller particles.

In my view, future theories and conceptualisations of Systems Thinking will once again be derived from the words of quantum physicists from the early 1900s. Particular in my mind is Niels Bohr’s discussion with Einstein on the epistemological problems in atomic physics [7,8], where the point of observation is as crucial as what is being studied. Because it is on the point of observation upon which the foundation rests and the structure will be built. 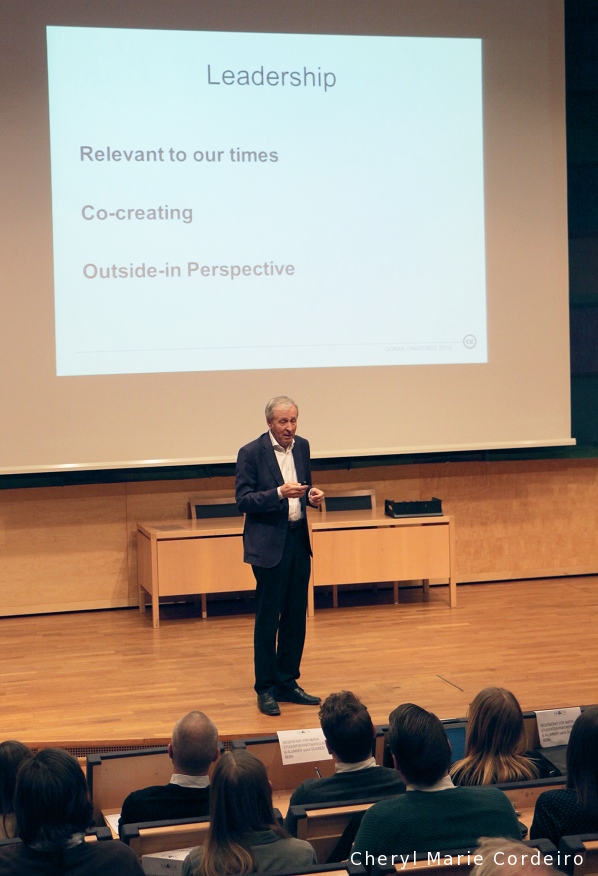 Göran Carstedt is Assar Gabrielsson Professor of the School of Business, Economics and Law at the University of Gothenburg. He is the founder of The Natural Step and has worked for the Clinton Climate Initiative. He talks about leadership and the challenges in transition towards a sustainable future. He was formerly head of Volvo Cars, France, and head of IKEA, North America. 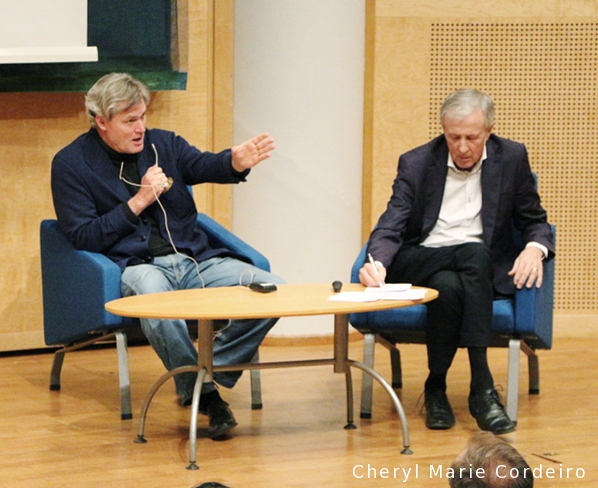 Gunter Pauli and Göran Carstedt in an open panel discussion with the audience at the School of Business, Economics and Law at the University of Gothenburg. 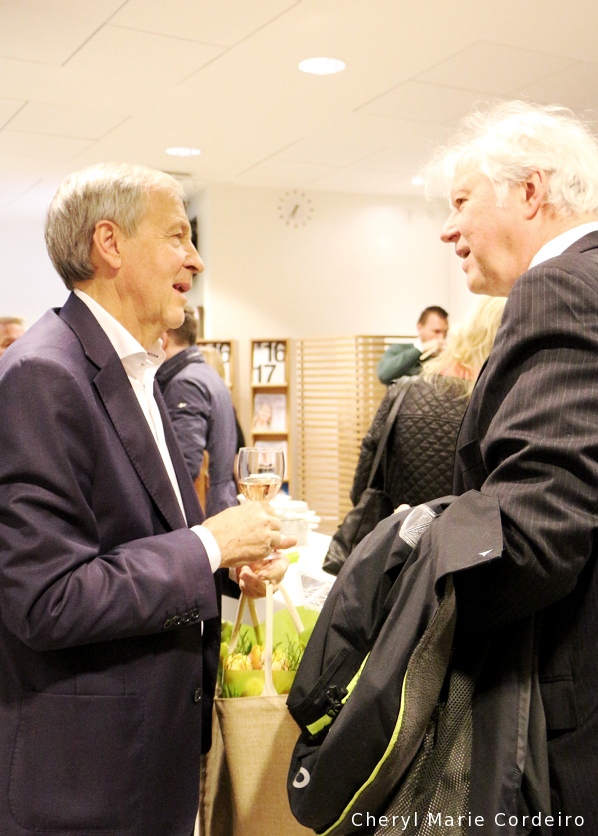