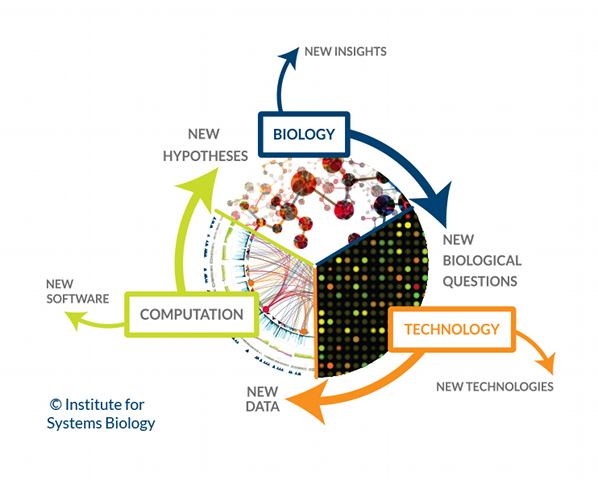 Illustration of the Trinity of Systems Biology, from the Institute of Systems Biology (ISB) and ISB’s Innovation Engine. “This virtuous cycle of biology driving technology driving computation can exist only in a cross-disciplinary environment where biologists, chemists, computer scientist, engineers, mathematicians, physicists, physicians and others can come together in teams to tackle grand challenges.” [1] Perhaps a potential complementary knowledge gap to be filled in the trinity of the innovation engine would be economic geography and the field of international business (IB) studies to investigate the facets of impact of such an innovation engine on economic policies and global value chains.
Text © CM Cordeiro, Sweden 2016

When studying trends of technological innovation, my thoughts are often drawn towards the evolution of the robotics industry and the impact of systems biology on machine design / function. Developed from the perspective of biological evolution as described in a 2006 study on self-modeling resilient machines, intelligent machines can self-diagnose its context, morph, adapt behaviour and replicate:

“Here, we describe an active process that allows a machine to sustain performance through an autonomous and continuous process of self-modeling. A robot is able to indirectly infer its own morphology through self-directed exploration and then use the resulting self-models to synthesize new behaviors. If the robot’s topology unexpectedly changes, the same process restructures its internal self-models, leading to the generation of qualitatively different, compensatory behavior. In essence, the process enables the robot to continuously diagnose and recover from damage. Unlike other approaches to damage recovery, the concept introduced here does not presuppose built-in redundancy (18, 19), dedicated sensor arrays, or contingency plans designed for anticipated failures (20). Instead, our approach is based on the concept of multiple competing internal models and generation of actions to maximize disagreement between predictions of these models.” [2:1119]

Intelligent machines are founded on nonlinear dynamics, the automated reverse engineering of such technology will have direct impact upon how people live and what they do for work in the near future. As self-learning and self-generating machines become increasingly adept (also demonstrated in the field of nanotechnology and nanobots [3]), these technological advances seem to leave its innovator species in need of reconciliating the growing gap between intelligent machines and a socio-economic and political structure that is currently struggling with the realisation of its impact in terms of the distribution of resources.

The question of a redistribution of resources and a need for the evolution of socio-economic structures as a result of this advancing wave of knowledge from evolutionary robotics is what Hod Lipson, professor of engineering at Columbia University in New York, addressed at EmTech MIT 2015 Robots Among Us: Seeking Creative Machines [4]:

“what happens when computers can be creative and do, not everything but do most things better than most people, what happens then and it’s not just a question of jobs of them because a lot of jobs in finance as a matter of policy more than anything else and it’s not even a matter of productivity, cause these machines will be creating a lot of good stuff but it’s a question of what people do what happens to social structure when machines can do most things better than most people, … jobs and creativity gives people meaning and when that’s taken away I think we begin to unravel a lot of social structures so these are things that I’ve realized that this is not some hypothetical question about the future of a million years from today, it’s probably in the lifetime over children.”

“the real question long term is how do we restructure our economy in a world where there is productivity. There’s there’s a lot of wealth there’s a lot of good performance and products but jobs are you know we have to think about new ways of creating meaning and creating accomplishment through other things like art like sports education things that are more transformative ourself to find and that’s a good place to look at I think that’s correct I think one of the challenges will be to give ever growing part of the population accessibility access to this technology to engage people in this city technology and use it to benefit people as many people as possible and we can worry about robots destroying jobs but I think the real challenge is how do we use it to you wrote the these technologies to grow jobs to create more jobs as we go forward”

“…I do think that at least a big part of a solution to this challenge is going to be a manner of economic policy, and the way I think about it is that we have to think about it as a kind of a trickle-up economy, where a lot of people have a basic income and innovators including computers and owners of AI sort of compete on a free market of collecting all that income by offering new products and services and that’s a different way of thinking about economy where everybody can partake in growing the economy and yet you have sort of a free market that fosters innovation and new services but it’s a radical, different way of thinking about economics and you see people on the left and on the right, supporting it or against it so it’s a very hot debate but regardless of what the answer is I think we have to start thinking about it, we have to start being creative about solutions, where we can use AI to offer some solution to this problem as well, but it’s certainly going to be a big piece of it, it’s going to be economic policy, absolutely.”

“…you’re talking about a scenario where human beings are not necessarily the most advanced beings on the planet, at some point. The one challenge here is, machines need uhm, at some level they’re optimizing some objective function. For ourselves we call that purpose. Eventually when physical challenges and analytical challenges are addressed, what purpose might be programmed into this machines?”

“So I can only say that we did one experiment where we didn’t give the machines any purpose. We just, I don’t want to say breed them for a particular task, we didn’t give them any task, we just allowed mutation variation to happen in a big vat of robot components, and you know what came out of that? Self-replication. So when you don’t give any purpose, you get self-replicating machines, and I would argue that that’s the purpose of biology and that’s the purpose behind almost everything you see. But that’s a short answer to a very very deep question.”

While there are no concrete frameworks in place for the moment in address to the challenges faced in the regional and global socio-economic structures with a shifting of labour and demographic forces into new types of work, what could be the beginnings of such a global economic re-structuring also in evolutionary fashion is the idea of the circular economy and its design: 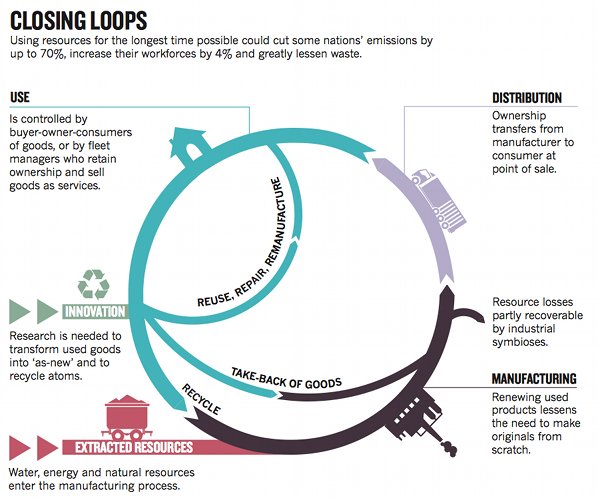 “Circular-economy business models fall in two groups: those that foster reuse and extend service life through repair, remanufacture, upgrades and retrofits; and those that turn old goods into as-new resources by recycling the materials. People — of all ages and skills — are central to the model. Ownership gives way to stewardship; consumers become users and creators. The remanufacturing and repair of old goods, buildings and infrastructure creates skilled jobs in local workshops.” [5:435]

Yet even here, Starhel [5] whose article lends a concise insight into the circular economy design highlights the challenge:

“As a holistic concept, it collides with the silo structures of academia, companies and administrations. For economists who work with gross domestic product (GDP), creating wealth by making things last is the opposite of what they learned in school. GDP measures a financial flow over a period of time; circular economy preserves physical stocks. But concerns over resource security, ethics and safety as well as greenhouse-gas reductions are shifting our approach to seeing materials as assets to be preserved, rather than continually consumed.” [5:436]

Technological convergence, trends, bolstered by circular economy thinking all point towards a need for an evolution in academia and the education system, because as “[s]uch automation [proves] critical in our quest to model increasingly complex coupled phenomena, identified as a major frontier in 21st century science.” [6:9947], what is needed is for the socio-economic side of this emerging ideological paradigm to provide complementary support and ‘close the loops’ in academic theory and practice.

These observations of the convergence of technology, as exemplified in the fields of the intersecting of systems biology and automated machine intelligence, would have in my view, ushered in the era of integral thinking [7] and modelling founded in a systems view of life [8]. These technological trends will have increasing socio-economic impact, where it could be said that intelligent machines and automisation make only part of the myriad facets of what digital infrastructure can enable [9,10]. It would be these myriad facets of change at several levels of impact, from national to and the global fabric of trade that would make for interesting study in the field of international business.