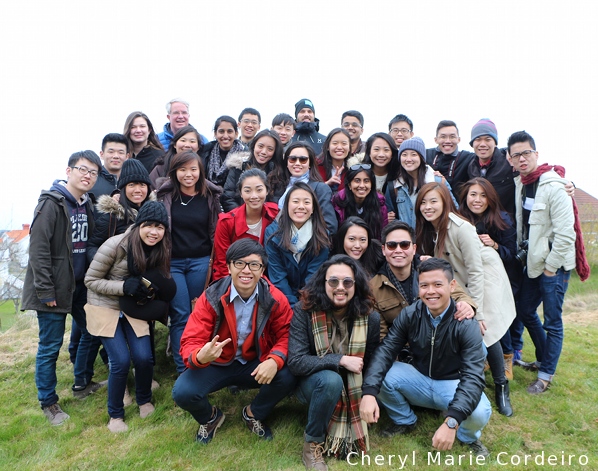 For a number of years now, students of the Singapore Management University (SMU) have made it a tradition on their annual Scandinavian Business Study Missions, to visit the actual departure point of the Swedish East India Company (1731-1813) yearly voyages to China. It was in the aftermath of these trips and those of the Portuguese, Dutch and the English companies that the very state of Singapore was founded just a few years thereafter as a British trading post in 1819.

Some years back, I found myself in discussion with a professor of economic geography, of the travels with students on a geography field study trip to an ice cave in Russia where during the time of the late 1900s, travel routes between Sweden and Russia were not as accessible as they are today. Listening to the somewhat humour filled challenges of gathering about sixteen students on the trip with either poor clothing choice or sometimes even lack of proper food during the long outdoor treks, I wondered if I could myself ever pull through such an expedition. I asked the professor what motivated him to arrange this student ice cave travel to Russia? “Well, what better way to illustrate the geographies and landscapes of the world than to bring the students there to see it for themselves?” I smiled. Yes, why not – the ultimate journey inwards begins first, outwards.

Some of the activities planned for students of the Singapore Management University (SMU) Business Study Mission (BSM) Scandinavia include visits to Nordic companies to gain primary insight into corporate values and culture in Nordic enterprises. Having students meet with individuals living in Scandinavia, experiencing the different languages, cultures and not the least the impact of the sometimes unforgiving Nordic weather and the resulting Nordic lifestyles, has the parallel idea mentioned above of the ice cave expeditions of helping students not just expand their outbound learning, but help them along their ultimate journey within.

In these journeys of exploration, students are encouraged to reflect upon their experiences and observations whether in contemplation of what once was considered a certainty in their own cultural traditions at home, or in application of a newly acquired understanding of a concept in the home context. When travelling the globe, one of the first realisations is that things are different, and things can be done differently, depending on context. “The idea is to disorient the central role of business in stakeholder theory and reorganize a properly plural set of spheres, an idea that does not always come to the fore in every class.” [1:467]

The valuing of the plurality of spheres could not be more illustrated as a case in learning point in the Götheborg III ship project in the building of a replica ship belonging to the Swedish East India Company that had its operations during the 1700s and early 1800s. These ships were the state of art technology that Scandinavia had to offer at the time, carrying with them not just goods across oceans but of cultural and knowledge exchange between Sweden and Asia (Far East and Southeast-Asia). The fact that many in Canton today, as well as Shanghai, China, recognise the Götheborg III Ship as a symbol of the city of Gothenburg and of Sweden is one such continued facet of evolving trade relations between Sweden and Asia.

Singapore with its sound governance remains an important country of influence not in the least due to its strategic geographic location in Southeast-Asia, en route to China. The Singapore government has recently embarked on its third Government-to-Government (G-to-G) project with China in Chongqing, positioning the country at one end of China’s “One Belt, One Road” project [3]. This joint project between Singapore and China reinforces Singapore’s continued strategic positioning as part of the Silk Route going through Eurasia, as well as along the Maritime Silk Road passing through Southeast-Asia. That the SMU BSM Scandinavia students are able to witness in primary context, the historical departure point of the Swedish East India trading ships through the southern archipelago of the city of Gothenburg, and connect that in the broader context of trade between Scandinavia and the Far East through Singapore is perhaps a valuable experience in itself, and one which we are personally happy to have been able to share in narrative for the group. 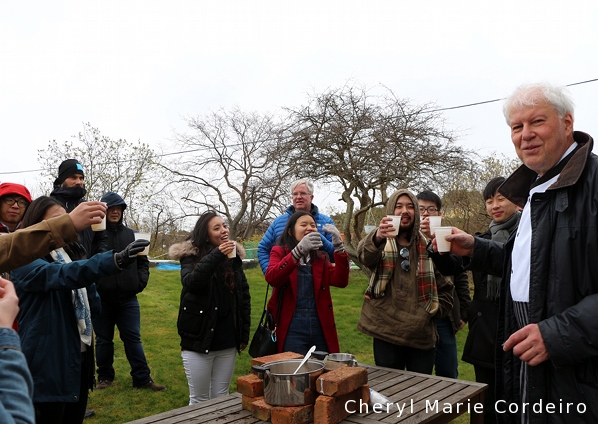 The Swedish East India Company (1731-1813) was an early example of daring business entrepreneurship that promoted both science and cultural exchange. Very early on, the benefits of fresh fruits as in lemons, was discovered as a remedy for the vitamin C deficiency sickness, common on board ships on long voyages at that time. Thanks to cooperation between medical science and commercial interest this was known on board the East Indiamen and developed into a sweetened warm ‘punsch’ that was very popular with the crew. This year’s cold and windy weather made a small sample of this sweetened warm Punsch appreciated.

An example in illustration of “a pluralism of value spheres” [1:8] and what the study of liberal arts in integrated perspective might bring to the field of international business – the spheres / petals of socio-economic influence of the Götheborg III Ship project visualised in a Metatron’s Cube. [2:44] 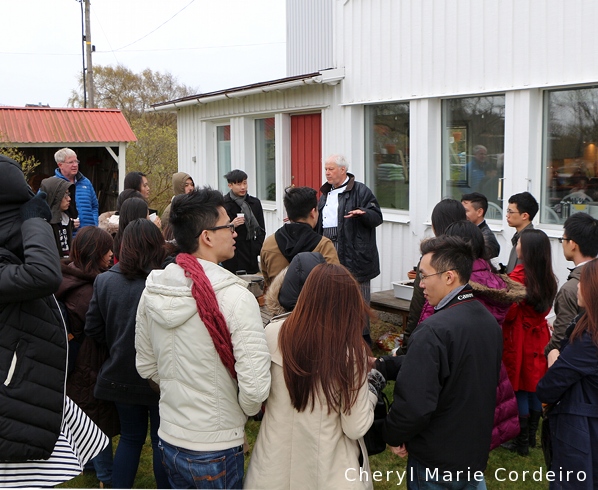 Jan-Erik Nilsson, co-founder of the Götheborg III Ship project explains; “During the 18th century, the East India trade voyages from Gothenburg to China began in December each year. The point of departure was here, in the southern archipelago just outside of Gothenburg to avoid being stuck in the ice closer to land.” 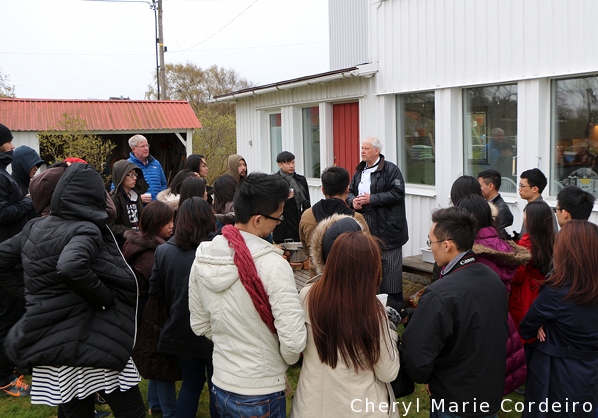 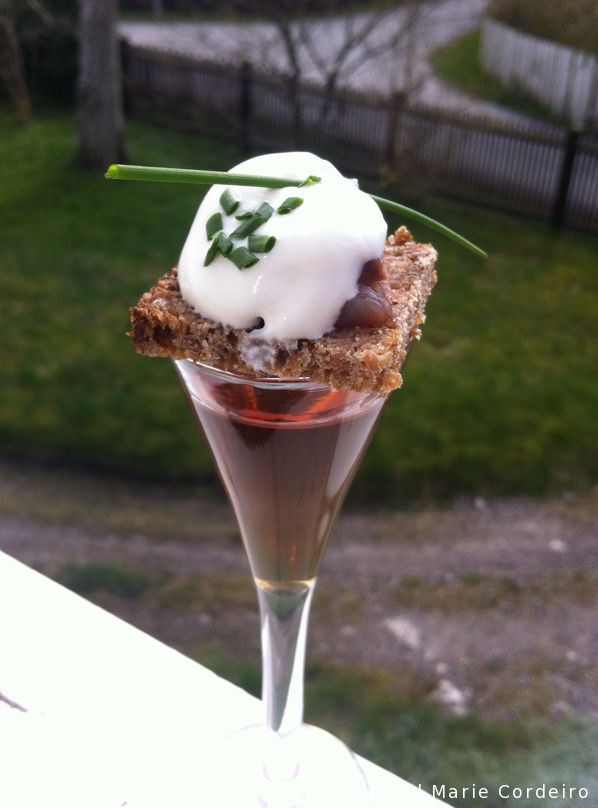 A typical Swedish summer apéritif, bite-sized preserved herring topped with crème fraiche and chives, served with a glass of snaps. 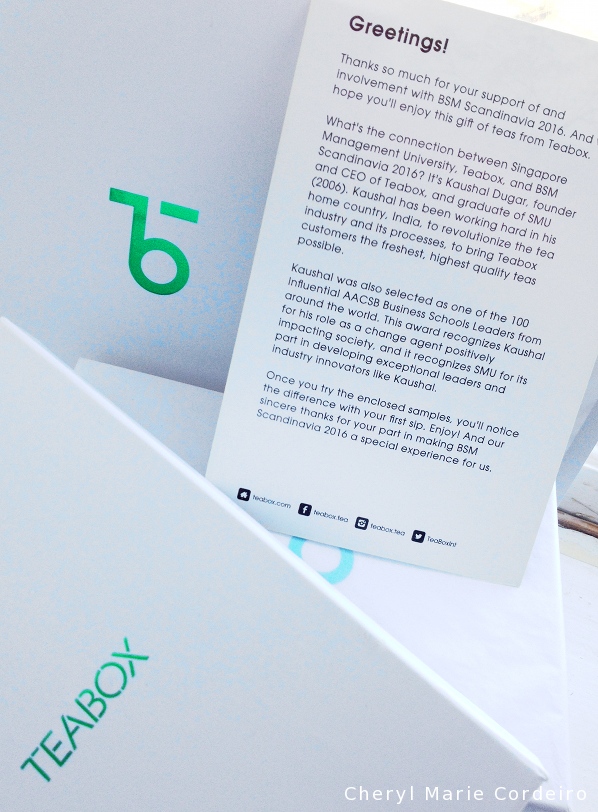 A gift also in illustration of the impact of a holistic education that sees value in fostering the individual’s capacity to operate in a plurality of spheres. This tea box could be seen as one of many results of a management education curriculum grounded in liberal arts, in the reflective and the critical, that the Singapore Management University recognises and fosters. In this inspiring gift comes the realisation that learning is indeed a lifelong endeavour, where teacher and student are but one and the same, the colour change is but an illusion that appears different depending on context.