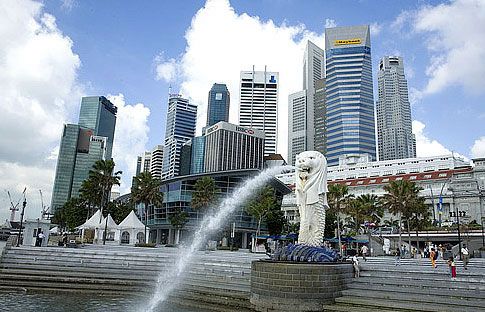 A view of the Merlion at the Esplanade, Singapore.

The world is becoming an increasingly small place to live in, we can feel it in the pace at which the world economy runs these days. World trade is much larger, faster and more intense than what we knew even from 1819 when Sir Stamford Raffles founded Singapore as a trade entrepôt. Many organizations today are multinational in nature in order to compete on the global scene. Employees in such organizations are often located away from home countries in order to continue the work of the organization on a global scale, contributing to the existence, expansion and success of the organization.

Organizations going global would also mean that their people would be working on a global stage, having colleagues from foreign countries. It would mean working with someone who not only looks physically different from yourself but who share a different set of values, taken-for-granted assumptions and collectively shared beliefs, in other words, a different ideology (Simpson, 1993).

These collectively shared beliefs or ideology, stem from their own socio-cultural and political background and working together would mean communicating on a daily basis about work projects, negotiating meaning with each other so that each one understands what the other wants, the aim of which is to push the organization forward in reaching its goal.

Individuals who are often deployed to an overseas organization affiliate from their home country would often possess specialized knowledge, expertise and leadership skills, so that they can help set up and steer the affiliate organization in the new country.

The case of Sweden

Sweden for example, is today more active in terms of setting up businesses and business affiliates overseas than ever before. For example, in Eastern Europe, Sweden has 900 organizations in Estonia, 500 in Latvia and 150 in Lithuania. With its current trading figures, Asia seems to hold the most promising trade for Sweden: China in 2005 for example had 44,000 Chinese employed in Swedish organizations with an annual intake of 7.9 billion US dollars and Sweden’s presence in China since 2003 has also doubled (Serger Schwaag and Widman, 2005).

The fast-growing markets for Swedish exports today are found in Asia, especially Japan, China, Hong Kong, South Korea, Malaysia and Singapore. Asia now accounts for 13 percent of Swedish exports, making it the most important single region outside of Europe. As Asia is one of the fastest growing markets for Swedish exports, the increasing Scandinavian and Asian international trade relations mean a need for a better understanding of management styles and working relations in the interdependent countries. A contributing factor to many failed cross national joint ventures and start-ups is due to a lack of understanding of international markets, cultures and management behaviour (Hill and Hellriegel, 1994; Hambrick, Li, Xin, and Tsui,2001). A greater chance of both tangible and intangible success will thus depend on understanding and acting upon the similarities and differences between management behaviour in different international markets.

With 93% literacy rate in the population and English as an administrative language (Malay is Singapore’s native language and Singapore’s national anthem for example, is written in the Malay language), Singapore proves a strong rival with Hong Kong to be Asia-Pacific’s regional hubs (Langdale, 1989) and is currently already a regional hub for many internationally based organizations (Mutalib, 2002; Teofilo and Le, 2003).

According to the 2007 statistics of the Swedish Trade Council (STC), who have been present in Singapore since 1978, there are approximately 160 Swedish or Swedish related organizations in Singapore with 900 Swedes living in Singapore. Companies included in the STC’s list are of the following three types:

The existence of the Swedish Business Association of Singapore (SBAS) also makes easy access to Swedish owned or Swedish related organizations in Singapore. The SBAS also provides a focal point for the Swedish business community to gather and exchange ideas and continue a Swedish / Scandinavian heritage in Singapore.