A Red Dot meet-up at Penn 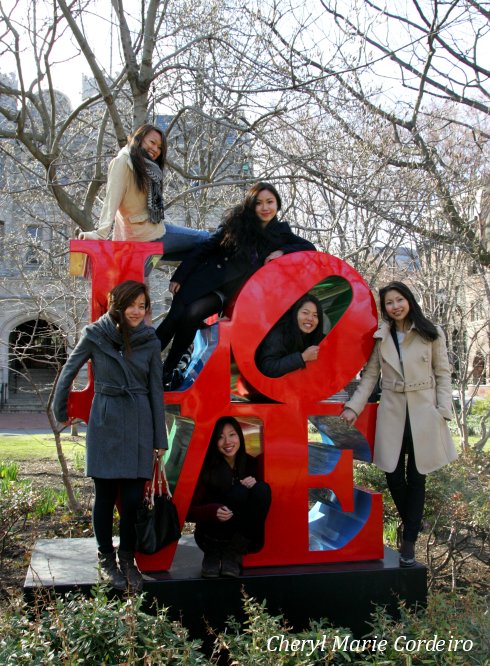 On University of Pennsylvania campus ground, a replica of American artist Robert Indiana’s iconic Love sculpture whose original is on display in the ‘Love Park’, near City Hall here in Philadelphia. The girls to the left? Haven’t a clue.
They were just there. Beautifully draped all over the thing.
Photo: J E Nilsson and C M Cordeiro-Nilsson © 2011

Founded by Benjamin Franklin, the University of Pennsylvania has consistently ranked one of the world’s top universities, with its business school, Wharton, being legendary. Even now as my work brings me side by side with faculty drawn from this ivy league university, I was happy to visit the actual campus, especially during Cherry Blossom season! 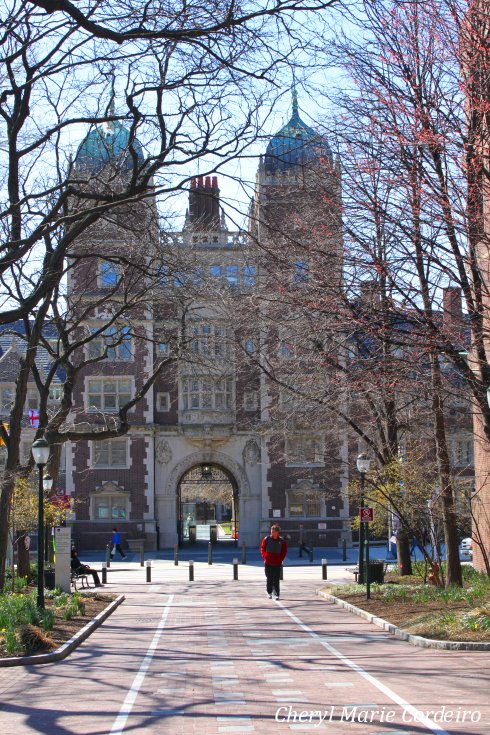 The Upper Quad Gate, the number one popular “dorm” or college house, among most Freshmen at Penn, scenic in the Spring sunlight. 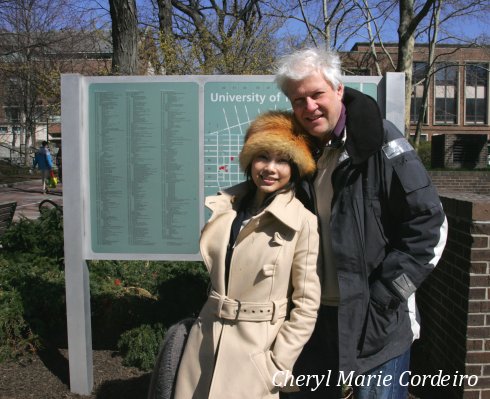 JE and I at Penn, directly across the Upper Quad Gate. 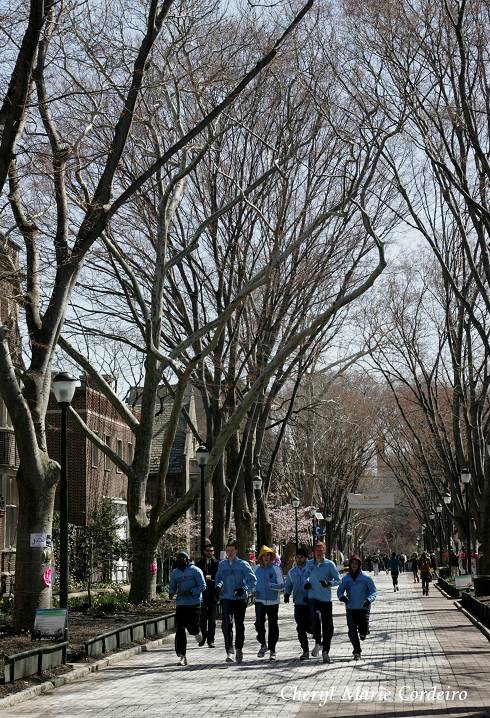 I completely enjoyed walking down some of its numerous pathways that bathed in the early spring sunlight, exploring buildings, the libraries, the bookshop and slightly beyond the campus grounds, a cozy shop that sold all things chocolate. Fictional Hogwarts excluded, I could never dream up a more vibrant campus life than what I met with at Penn walking down Locust Walk. 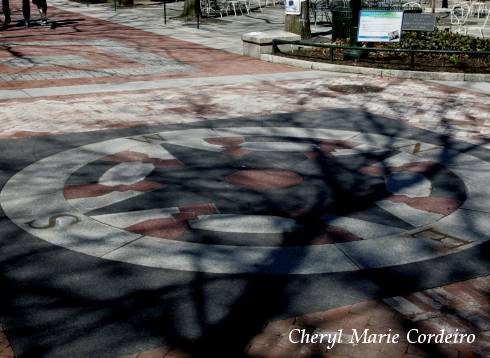 University lore has it that Freshmen should not step on this compass least they would fail in their examinations. 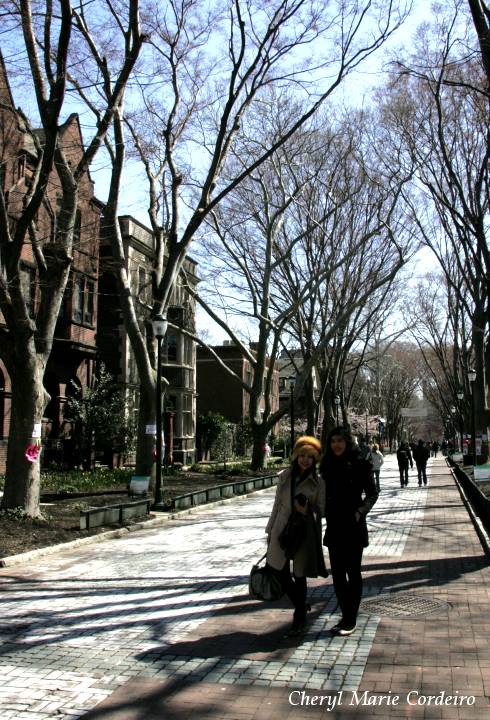 To the left, fraternity houses.

While the University of Gothenburg has its medical faculty located in a different part of the city than for example the faculty of humanities, Penn’s sprawling campus encompasses all faculties within walking distance of each other. I could see how this physical proximity between faculties would encourage a multidisciplinary approach to academia for both faculty and students, giving Penn a coherent backdrop in which research, education and student life can thrive with dialogues kept continuously open between widely disparate faculties.

The history of Penn is not only narrated in the architecture found on campus, but the discourse continues with numerous works of art scattered across the university grounds, where both students and visitors alike can bask in all aspects of public expressions. It’s brilliant, its fun, its beautiful, relaxing and energizing your mind at the same time.

The Split Button in front of the Van Pelt Library, designed by Swedish born sculptor Claes Oldenburg, who specializes in creating oversize sculptures of everyday objects. This sculpture sits right across a statue of Benjamin Franklin. Legend has it that Franklin, who was a man of considerable girth one day sat down and his vest button popped off and rolled across the University’s Locust Walk. It eventually came to a stop and split into two – hence becoming today’s sculpture. The sculpture though, was received with mixed reviews . 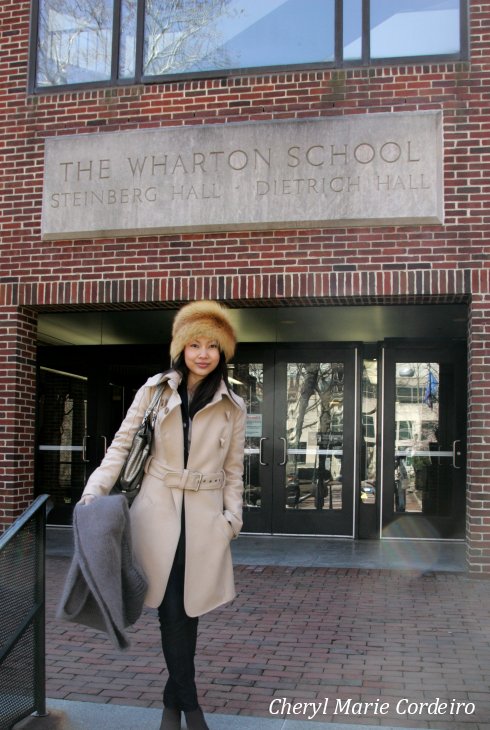 Conference venue: Steinberg Hall Dietrich Hall at Locust Walk, at the Wharton School at the University of Pennsylvania.

For those unfamiliar with the expression Little Red Dot, it generally refers to how the entire Republic of Singapore is represented on most maps, borders, capital and all. Originally a disparaging expression, it has now come to be used by the Singaporeans themselves with some pride, referring to the nation’s success despite its physical limitations.

As such, this expression was used in this year’s edition of the DiaS’pura conference, organized by the Singaporean student community at the University of Pennsylvania in Philadelphia, USA. This year was the third biannual event, the two previous being held in 2007 and 2009. 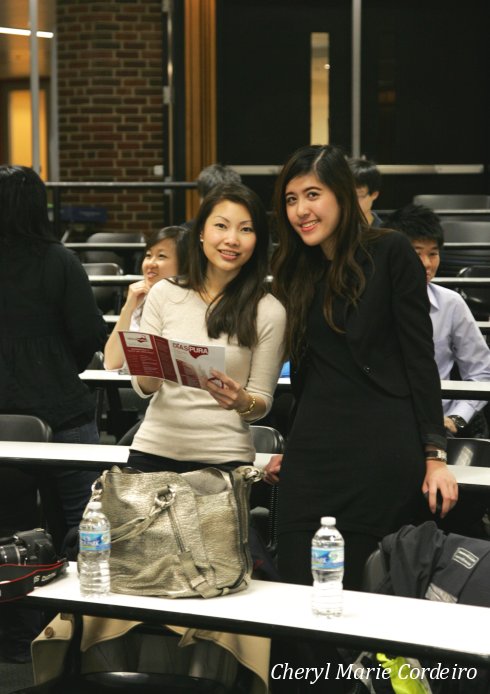 In the lecture hall, with Lavon Wong, student at the University of Pennsylvania and member of the DiaS’pura 3 organizing committee.

To many, the USA is considered a young nation with its first emigrants having reached the American shores about 400 years ago. To a Singaporean however, that is ancient.

Singapore was founded not earlier than in 1819, while the modern republic was formed not further back than 1965. The Singaporean population majority are of Chinese descent (76,8%) while the remaining portion consists of innumerable minorities of which my own – the Eurasians – are by far not the smallest. The main languages spoken in Singapore are English, a variety of Chinese (Mandarin, Hokkien, Teochew and Cantonese), Malay and Tamil. Among the religions, Buddhist (Daoism and Confucianism) are the largest (40%) while Islam, Christianity (Catholicism and Protestantism), Sikhism, Hinduism and Baha’i etc. make up the balance.

As a Singaporean, all these variations of religion, language and ethnic cultures existing within a limited geographical boundary are the norm. We live and thrive in the midst of it all, carefully stepping around small street altars that someone have built for one purpose or another, or nodding respectfully to neighbors burning joss paper and after-life artefacts for a deceased, handing out red money envelopes to the Chinese but green to the Muslims etc. We participate in each other’s ceremonies and celebrate whatever festivities that come along in this truly multi-ethnic, multi-cultural, multi-lingual society. 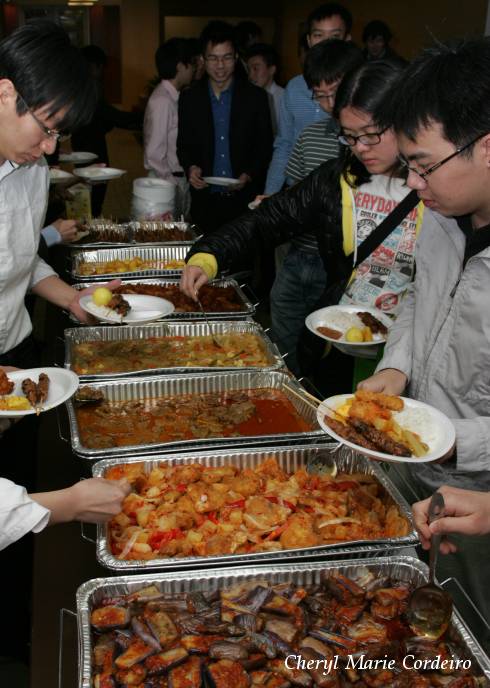 Singapore has a distinct food culture. This was reflected at DiaS’pura 3 with the students bringing in Singapore fare. And for drinks, authentic Bubble Tea from Taiwanese students who decided to open shop on campus.
Brilliant and impressive!

Just as how some Swedes who live in Singapore as expatriates have shared with me that they feel ‘more Swedish’ when outside of Sweden, the general atmosphere at Penn at this particular conference resonated similar unspoken sentiments – all Singaporeans were suddenly just that – Singapore culture-carriers, something that is poignantly apparent when we leave the country, to live and work elsewhere. All background differences melt away and the common heritage of no common heritage, becomes the common denominator that defines and ultimately unites us.

That was also the general theme of DiaS’pura 3. The questions of who we are, what difference can we make outside of Singapore and where do we go from here – our dreams and choices – were all explored and voiced at the seminar and the following event, the Sing City 3 musical. The latter being an original musical designed, written and performed by young Singaporeans at Penn for this event only.

Needless to say, I was happy to have been an invited speaker.

The seminar was held in the Steinberg Hall-Dietrich Hall and begun with a welcoming note from the organizing student body, the Singapore Club. 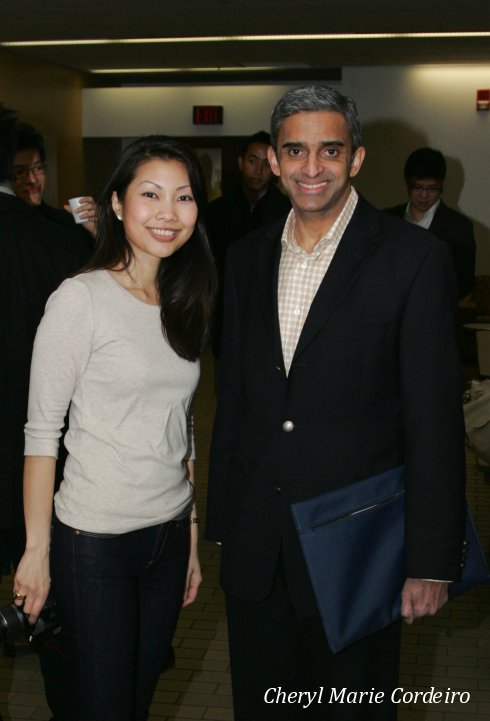 Before the conference, meeting with Ambassador Vanu Gopala Menon, Permanent Representative of Singapore to the United Nations and Singapore’s former Ambassador to Turkey. He held a most appreciated keynote address on Singapore’s place and briefly covered some of Singapore’s portfolio within the UN.

The keynote speech was delivered by Ambassador Vanu Gopala Menon, Permanent Representative of Singapore to the United Nations and Singapore’s former Ambassador to Turkey and focused on Singapore’s profile towards the world and how Singapore’s economic success despite our modest numbers, still gave the country a respected voice in international affairs. 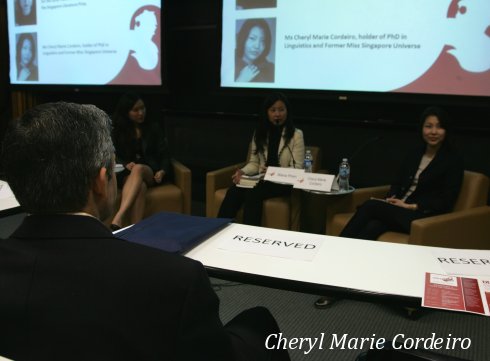 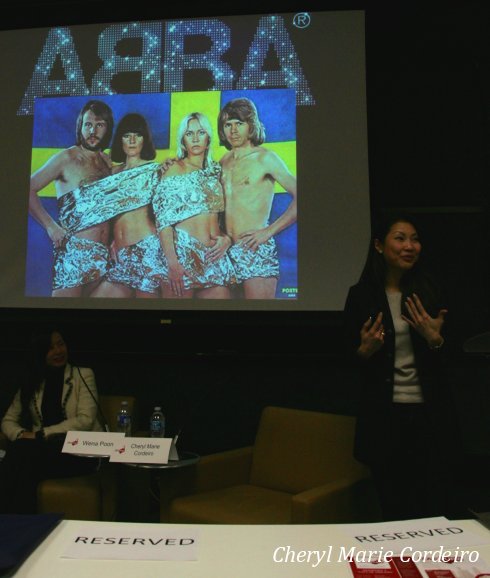 The picture of Sweden to much of the world (myself included) was ABBA, when I was growing up in Singapore.

The first of two panel discussions was shared between me and Singapore’s award winning writer and lawyer, Wena Poon, during which we had been asked to develop the theme of living and working overseas.

Wena Poon, professionally a successful lawyer based in New York specializing in corporate law, spoke about how her work as an author had given Singapore a literary voice that was heard far beyond the shores of Singapore. A point of frustration for Wena is that some of her work has not even been published in Singapore.

During my section, I focused on the many issues facing anyone trying to pursue a higher education as well as a successful career anywhere, where everything from the climate to the language spoken is different from what you know, and how this could eventually be turned into an advantage. 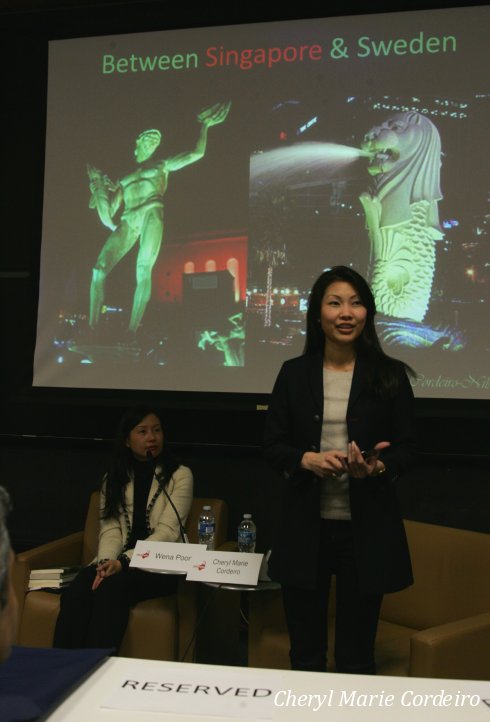 Sharing my experience of living and working in Sweden.

The Q&A session saw a variety of questions among the large audience with topics ranging from the abstract to the more practical details of family life. One of the questions I got from the floor was on how I reconciled the two aspects of my life, the glamorous beauty queening and the lackluster library rat life of an academic.

Strangely enough I have never thought much about that. To me research is gathering facts and the “beauty queening” is just self presentation, and that is something we all do one way or another.

Admittedly, most would however, freak out if asked to present the corporate strategy in a bikini, in front of Donald Trump, who by the way, was once a successful graduate of this very venue, the Wharton School of Business at the University of Pennsylvania in 1968, and sitting in front of the stage or being on it, might be less of a difference than one might think. 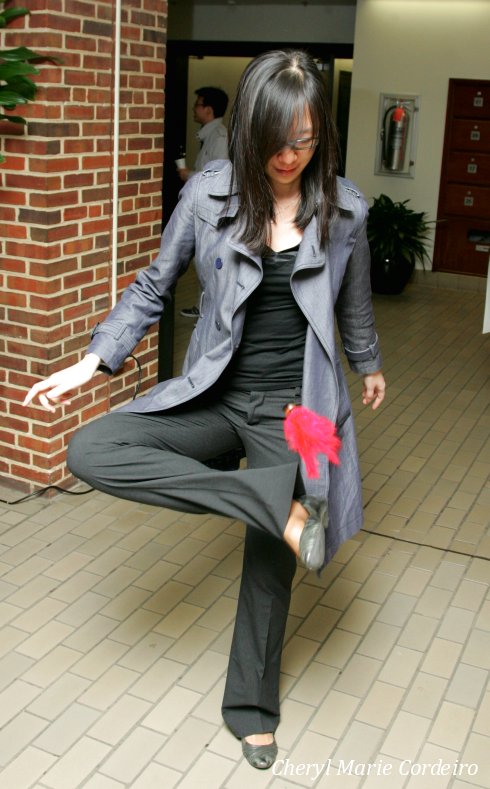 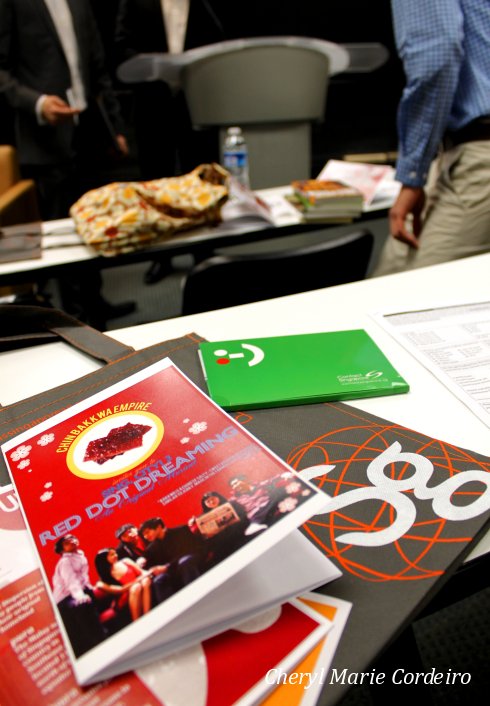 Having spent the day at Penn, I thoroughly loved hanging out with this group of young academics and professionals, who with a touch of humour, recognized that they were all overachievers in a typical Singaporean fashion of some sort.

It was no surprise at all that among these brilliant scholars at an instant Ms. Zhang Xi, showed off an unexpected mastery of Chatek (shuttlecock) kicking, as if she had never stopped playing the game from whence in primary school, or that a bunch of students, given a few months of preparation would design, write, produce and then perform a completely original musical – Sing City 3, Red Dot Dreaming – encompassing cogent themes of the Singapore way of life from a son to take over a family bak kwa business, to trying to figure out whom to marry. The musical was the highlight of the evening of course, in front of a sold out auditorium. 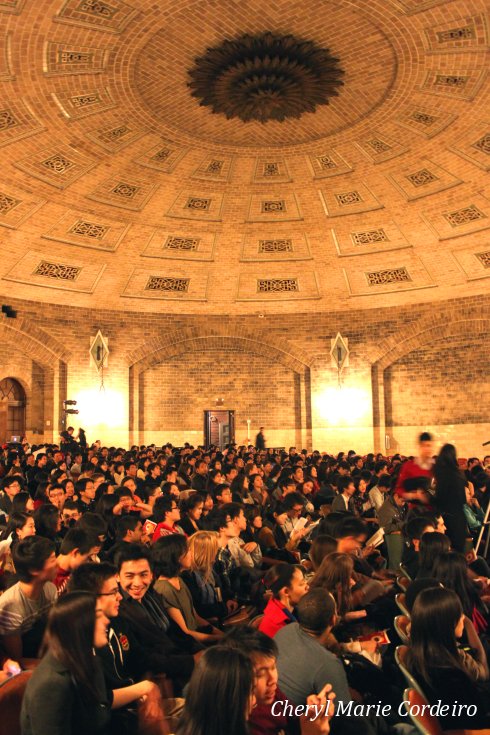 The musical Sing City 3 was the highlight of the evening, brilliantly performed in front of a sold out auditorium. 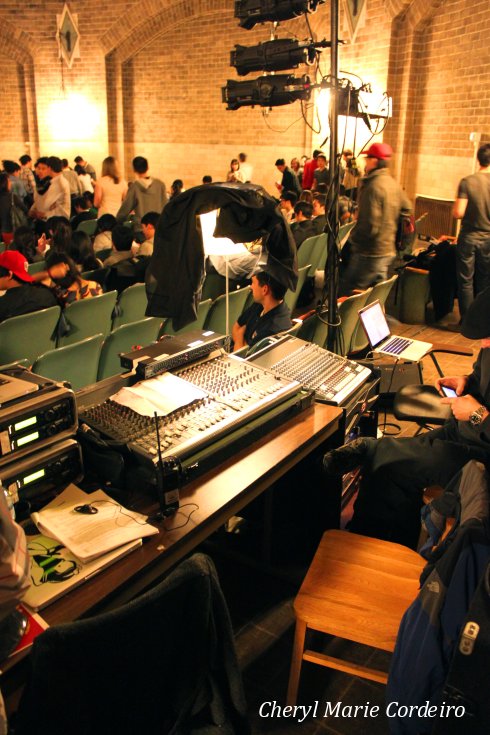 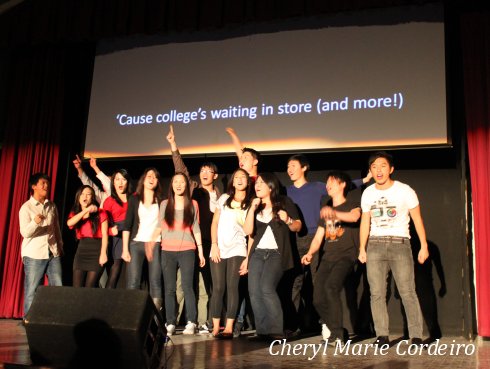 The show was brilliant down to its details such as the light hearted backdrop projection of Singlish to English translations of Singapore Colloquial English (SCE) for non-Singaporeans and Singaporeans alike, and a humorous nod towards Singapore’s karaoke culture.

Personally, I was struck by how motivated to succeed these young Singaporeans were and how hard they are willing to work to make their dreams come true. We were all floored by the display of talent, youthful enthusiasm and energy as the event concluded with a burst of colourful accomplishment in lyric, song and dance.

Dreams were what brought our forefathers to Singapore, and dreams are what brings some of us away from it. Singapore as we know it, moves on.

And perhaps to follow our dreams, wherever they may take us, is exactly what it is to be a Singaporean.

A warm Thank You! to the talented organizers, students and performing artists behind DiaS’pura 3 and Sing City 3. It was an event to remember.

3 thoughts on “A Red Dot meet-up at Penn” 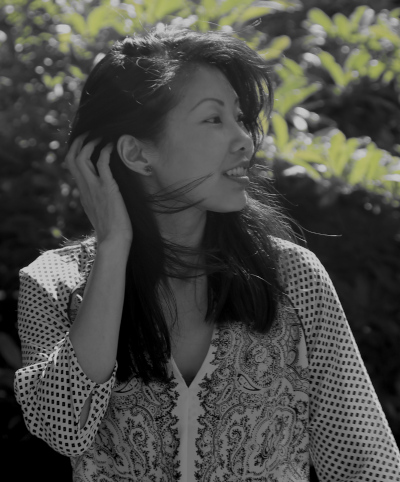