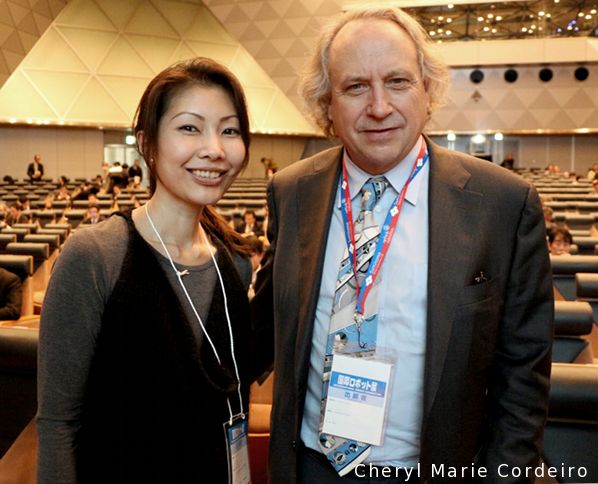 The NEDO Robot Forum took place between 3 to 4 December 2015 in conjunction with the 21st International Robot Exhibition (iREX 2015). Held at the conference tower of Tokyo Big Sight in Tokyo, Japan, the forum saw a gathering of some of the best minds of the industry and academia. 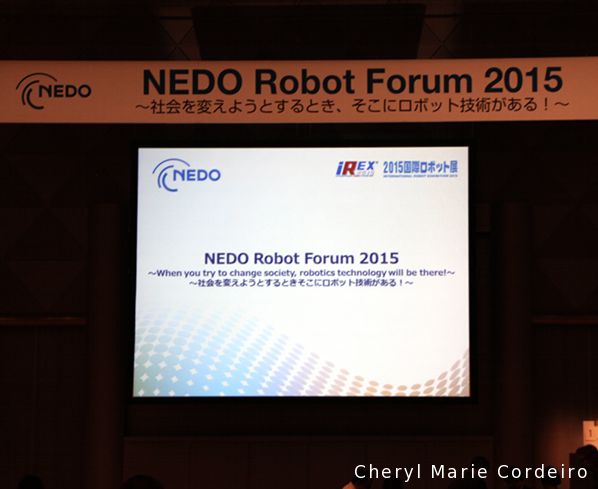 Steve Cousins is the founder and CEO of Savioke, creators of the Relay (Botir and Dash) delivery robots for hotels and was previously President and CEO of Willow Garage, overseeing the creation of the robot operating system (ROS), the PR2 robot and the open source TurtleBot. Over the next decade, Cousins sees a major shift, as capable, task-oriented robots begin to work in the service industry. Savioke’s Relay delivery robot whose features that Cousins presented at this forum makes for a good example of this shift in trends. Relay delivers requested items from the front desk of a hotel to any guest room, calling elevators via wifi and avoiding obstacles along the way. Whilst industrial robots save labour, improve quality and consistency of the final product, Cousins views service robots as improving the quality and consistency of services delivered in the leisure industry. In addition to relieving hotel staff of mundane tasks, Relay provides a consistent, predictable and most of all, enjoyable experience to hotel guests who ask for most anything from coffee to towels and toothbrushes. 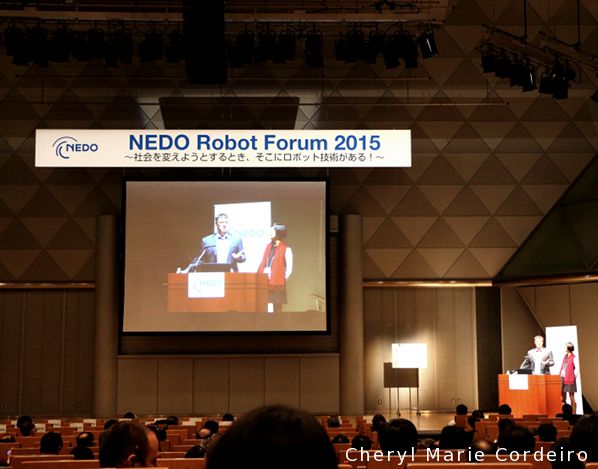 On stage, Dr. Steve Cousins, Ph.D. from Stanford University and founder of Savioke. Before founding Savioke, Cousins was President and CEO of Willow Garage, where he oversaw the creation of the robot operating system (ROS), the PR2 robot, and the open source TurtleBot. 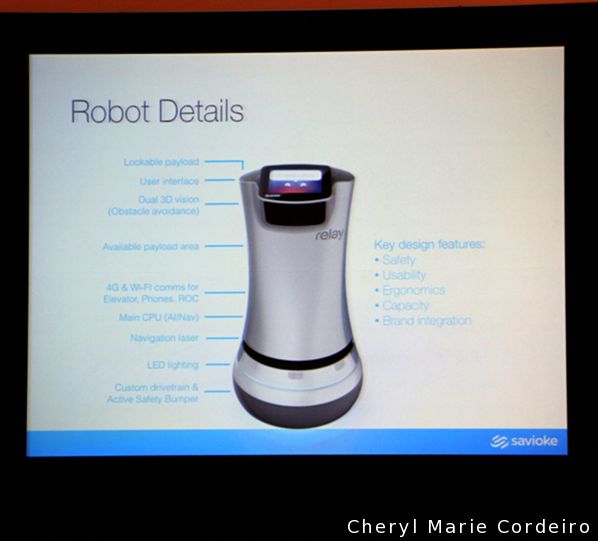 More than the delivery functions of Relay, is the experience of having a service robot in the hotel, where children are likeliest to approach it, curious and wanting to play with it.

Robots in hotels
A question for Steve Cousins when deploying service robots in hotels is – what do guests think of having service robots around in the hotel? As it turned out, Cousins and the Savioke team found that guests really liked the robots, as reflected in the write-ups and feedback received via social media websites and travel review websites. Cousins attributes this liking of the robot to three reasons,

i. the first being the overall experience of the service robots that shorten waiting time for items requested from the front desk,
ii. the second has to do with the culture of tipping hotel staff in North America, where Relay takes away the awkwardness of having to tip for a service rendered due to that an increasing number of people carry no cash with them on holiday and
iii. the third is the practical issue of privacy where people don’t feel they need to get dressed when items are delivered to their door. Relay is equipped with privacy sensors and will not peek into rooms when on delivery mode. 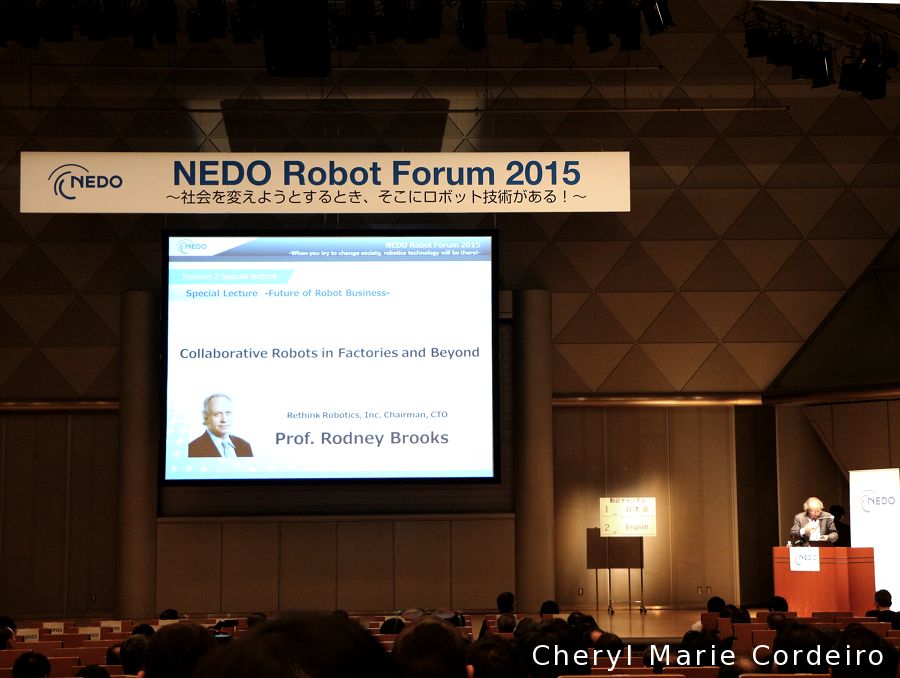 II. Collaborative Robots in Factories and Beyond

That robots and humans could move fearlessly in close proximity was also a theme addressed by MIT Professor Emeritus Rodney Brooks when discussing collaborative robots for the future. Brooks is author and a robotics entrepreneur, co-founder / CTO of iRobot, and co-founder / CTO / Chairman of Rethink Robotics. Renowned for developing the behaviour-based approach to making robots intelligent, his companies have to date, delivered more than 14 million robots to the home, in dangerous environments and in factories. Brooks developed the iRobot Roomba, a robot solution cleaner with an adaptive responsive cleaning technology based on the philosophy of modelling robots after insects, equipped with simple control mechanisms tuned into their environments. The iRobot Roomba was launched in 2002, and has thus far reached over 10 million homes as of Feb. 2014.

The case of China
Brooks spent a lot of time in China with people in factories. In 2004, he noticed a change starting to happen in China with regards to its demographic profile. By 2014, he noted that the number of 15 to 19 year olds where the labour force comes from in China had dropped dramatically, decreasing by 30% in one decade. It was also the case of chronic high turnover rates in the labour force most apparent to Brooks in the electronic industry with labour turnover rates of 16% of employees per month that indicated a shortage of labour happening in China. When looking at American factories, Brooks found the average age of a factory workers was 56 years old, indicating that young individuals were not going into manufacturing. All these pointed towards that the solution to these challenges was more robots in factories. 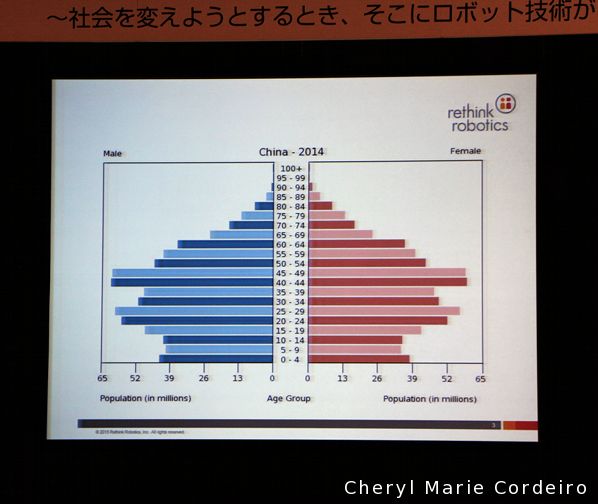 The scenario for a typical factory equipped with industrial robots is robots in cages or people in cages in order to keep them safe from each other. Whilst the consumer electronics industry has seen major systems integration evolution between user and product, regarding ease of use where the smart phone for example teaches its user how to use it, this hasn’t quite as yet occurred for industrial robots in the past fifty years.

Systems level integration
Brooks took that observation of a lack of systems level integration in robots to building his new products. The Roomba for example is a simple, easy to interact with house cleaning solution. Just as Steve Cousins had talked about how important it was for the user to interact with Relay at the door when items were delivered, Brooks wanted to bring his products to a new level of modern interaction with end users. With an understanding of other developing facets of manufacturing such as industrial internet, IoT, additive manufacturing, the idea of near shoring that brings manufacturers closer to customers, the digital revolution in general where smart phones have enabled cost effective sensing and pervasive connectivity, Brooks set-forth to put together Baxter, a limited intelligence industrial robot that humans could work with side-by-side. 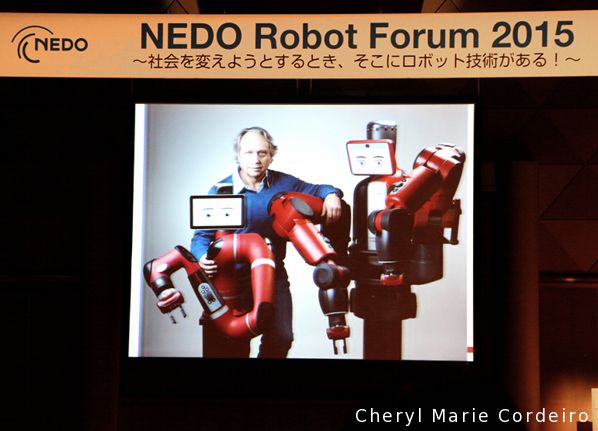 Using what is called a zero force gravity compensated mode, the robot tries to apply zero force everywhere in its system as a means to infer actions and to be programmed by the user. The idea is that a factory worker who is not a manufacturing engineer could program a robot, and train it to do new tasks in under a few minutes integration time. Baxter incorporates in its digital screen, a set of eyes that glances where it’s supposed to reach so that humans can infer the intent of the robot and its movements so as not to be surprised when it reaches left or right for an item. In designing the robot interface, Brooks bore in mind two things, that he wanted the robot to (i) know what you (the user) mean and (ii) to do what you (the user) wants. Because the robot is not programmed to a set of rigid task control, a user can with ease, go back in the sequence of tasks to make changes to how things are done by the robot. The force control of the robot enables the robot to sense forces to its body and system so that it is able to predict and infer how much forces it should feel when conducting a task. A different force to its system signals a collision and the robot stops moving.

Enablers of future robotics
According to Brooks, just as the Chinese factories are dominated by demographics, the next thirty years of the robotics industry would perhaps be dominated by the demographics of an ageing society. Over the past forty years in China, the United States and Europe, the world has seen a small decrease in the percentage of adults in the workforce. In the next forty years however, the drop in individuals in the workforce is expected to be dramatic. This implies a scenario of fewer younger individuals to care and provide services for the elderly. Whilst an open immigration policy could be a means to solve this demographic issue, many governments for the moment remain conservative in their immigration policies, one of the reasons why we see a growing focus of service robots in the robotics industry. 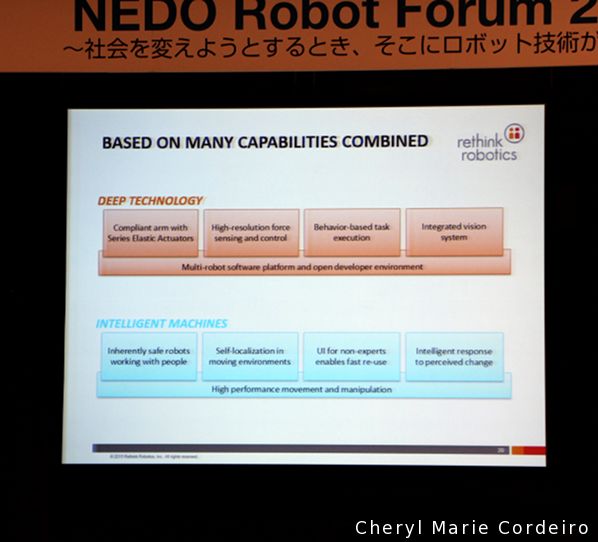 Integrating technology and intelligence in machines as the way forward for future robotics.

Robots are thus seen not only for driving tasks but for improving the quality of life at home, helping elder individuals keep their dignity of independence and control over their lives. The focus on elder care robotics is a new area of research for many in Japan for example, it is an area of research that could do with more public funding for the benefit of society.

Brooks pointed out three areas to be solved by robotics researchers in order to get robots into the houses that include: 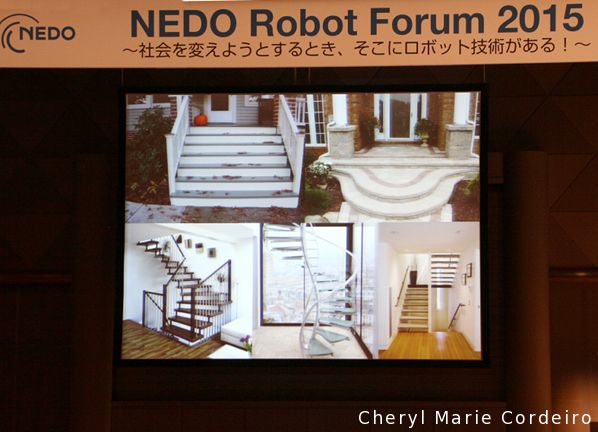 Taking a car with many drive assist features as an example of elder care, Brooks highlighted a very real scenario familiar to the United States where drive assist features in a car enable the elderly to have greater control over their lives. Due to the manner in which suburbs are built with long distances between amenities and homes, once an individual loses their ability to drive, they lose too, their independence and quality of living.

Robot dexterity
When it comes to robot mobility in the home context, there is currently no good research platforms to explore proper mobility of robots. Clutter is also something that robots in the home environment will need to be able to navigate. To this extent, Brooks thought that the gaming industry brought good news due to low cost 3D senses that would enable robots to navigate better around clutter at home. Manipulation and dexterity of robots would be the most challenging because there have been little success in the replication of the human hands in robotics. To encourage research and development in robot dexterity, what Brooks did with Baxter was to make research versions of it. There are currently about 300 research versions located in labs all over the world, including many in Japan that provides a safe, easy to use manipulator. It is hoped that an increasing number of researchers will start to build interesting hands for it, so as to achieve dextrous manipulation. But dextrous manipulation remains challenging due to that four things need to progress and develop in parallel:

a. mechanisms
b. sensors equipped in the robot hand
c. materials that are important for grasping. A purely metal hand would mean that the robot would not be able to grasp plenty of objects that a human hand could grasp and
d. algorithms

The parallel progress for dextrous manipulation means that teams of expert individuals need to come together and take action. This is an area where a lot more funding on a global scale can take place. Once dextrous manipulation is achieved, Brooks believes that we could get robots to help people in many ways.