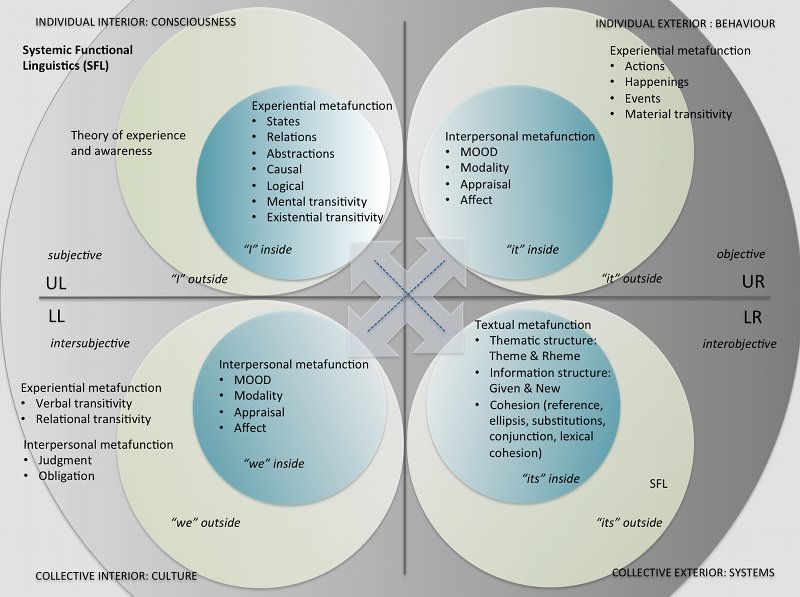 Figure 1. A representation of Halliday’s (1994) systemic functional linguistics as a language system in Wilber’s (2006) All Quadrant All Levels (AQAL) model. This SFL AQAL model places the metafunctions of SFL into the eight primordial perspectives of the eight methodologies, rendering a sixteen dialogic perspective of language theory and structure situated in a four-quadrant model.
Text & Photo © JE Nilsson, CM Cordeiro, Sweden 2015

I love modeling. That is, fitting pieces of concepts that build a collage of sorts with neat corners. I have been contemplating if I could fit Halliday’s systemic functional linguistics (SFL) as a language system into Wilber’s All Quadrant All Levels (AQAL) model. Models derived from general theories are not always practical, but as Hjemslev (1970:105) argues of creating a general theory of linguistic structure:

“we must start with some definition of language of the kind we have been considering, because the establishment of such a theory is not simply, or even principally, a matter of experience, but rather of calculation. Experience is no adequate basis for a theory of linguistic structure: it would be impossible to go through all existing linguistic texts, and, moreover, it would be futile, since the theory must be valid not only for the texts that have been written or spoken up to now, but also for those that will be written or spoken in the future.

On the basis of certain experiences, which must necessarily be limited even if they should be as varied as possible, we make a calculation of all conceivable possibilities within certain frames. These frames we set arbitrarily, by taking – as we have done now – certain features that are present in all the objects commonly called languages and generalising so as to say: all objects displaying these features I shall call languages. It may not turn out that some of the objects falling within the definition are not commonly called languages, but that makes no differences provided only that no objects are excluded that are commonly called languages. After we have thus defined – arbitrarily, but appropriately – what we shall understand by a language, we next set up a general calculus for all the objects that will prove to satisfy our definition, a calculus providing for all conceivable cases.”

Halliday argues too, that both experiential and interpersonal functions are intricately organised, and that between the two “there is comparatively very little constraint” such that one could “put any interactional ‘spin’ on any representational content” (2003:18). To that extent, where the tradition of taxonomy might wish to keep as clean lines between classifications as possible, the dialogic nature of the strata of the system of language makes a two dimensionally represented SFL in AQAL inadequate in visual representation. Nonetheless, I think that is how it could possibly look, shown in Figure 1.