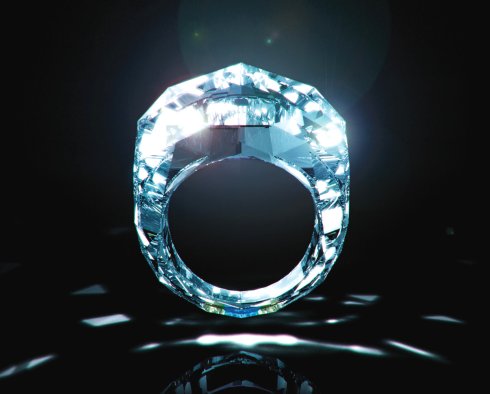 Anyone with a latent interest for absurdly expensive things would have noted the Shawesh brothers of the the Swiss Shawish Jewellery company unveil their 150 carat laser-cut ‘all diamond’ ring at the recent prestigious BASELWORLD watch and jewellery event in Zürich, 2012. Their actions, at a time when world news is dismal with civil unrest and a massive earthquake hitting Indonesia, that brings forth uncomfortable memories, in a stroke of genius in their world, re-defined the concept of something as superfluous as a ‘diamond ring’.

Even with modern techniques, the cutting and polishing of a regular diamond crystal would result in approximately 50% loss of its weight. With this ring from Shawish Geneva the staggering weight loss in itself would break the hearts of many brides-to-be.

But therein lies the very definition of luxury from the point of view of the surreal.

The value of this copyrighted all diamond ring comes more from what is not there any more, the center removed to leave us with a ‘mere’ 150 carat ring. Its very design defies any logic of usefulness in the sense that it is not possible to re-size it to fit the buyer, but that the buyer needs to fit the ring. Thus almost all the logic of the sale point that jewellery should fit the wearer and so on, basically almost everything philosophized and argued for by J.N. Kapferer and V. Bastien in their 2009 book, The Luxury Strategy rings true. This product will – literally – not bend to anyone but the buyer will need to give up everything, including delivering 43 million GBP ($70 Million USD) for the pleasure of owning it.

A video from Shawish Jewellers, in collaboration with Intoit Management and Il Bottaccio Venue, from its London unveiling of ‘The World’s First Diamond Ring’, a copyrighted, £43million, 150-carat ring composed entirely of a finished diamond.

This ring encompasses all paradoxes of the concept of luxury, where luxury in itself carries with it contradictions of being. Again according to Kapferer and Bastien (2009), luxury is all at once accessible and inaccessible, exclusive and inclusive, isolating and encompassing. A ring such as this, with its very own personality, will demand of its owner and wearer to be very solidly worthy of it. Who could possibly wear an object like this and not end up being worn by it? As such, the thought then lands on the question – can the ring in all its exclusiveness find its suitor, even if it came in the form of a gift? Its very quest for a suitable suitor defines it – a Cinderella Diamond Ring.

Just as well that most who encounter this object will see it as an all diamond ring, the first of its kind. And so too perhaps that Shawish Jewellery is trying to sell it as such, a breakthrough concept in a diamond ring. But what if it is, as I see it, a Cinderella Diamond Ring?

A few years ago a similarly unlikely object – the Hirst Diamond Skull – appeared on the market. That was however properly advertised as art but evoked similar questions for me, which I haven’t seen reflected anywhere else however the similarities in concept are there.

This is also the case with other objects in history that have refuted a purpose except, to just be. The great Pyramids come to mind or the Eiffel Tower.

In my mind, this amazing ring is really a piece of art, with all its thought provoking and multifaceted values and the beauty of it all, that encompasses too, the ultimate globalized experience of current times – a fantastic blink of surrealism away from the grim of the daily. And like the infinite steps of the Krupp Diamond when peering into it, this ring is just so?

But from surreal to real, well yes, if given the chance, I will of course see if the ring fits, just in case.