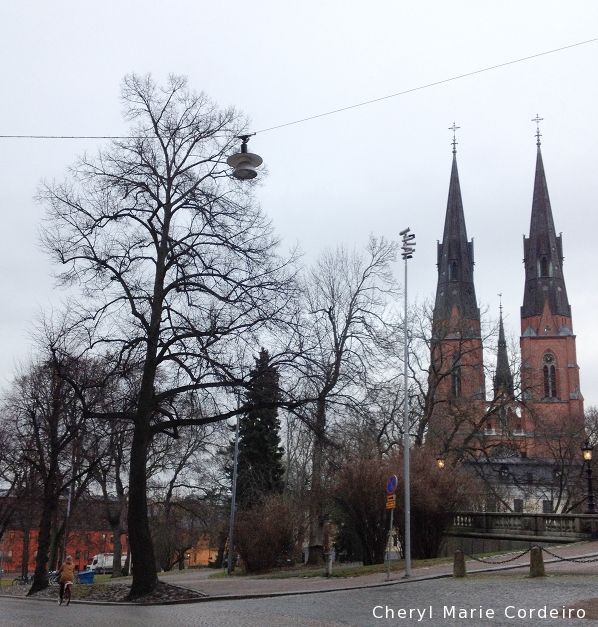 $1: Uppsala is a beautiful city isn’t it? It’s the first time that I’m here. I’ve always heard about it being a university-city, because of its history and how it’s really the true capital of Sweden, housing the first of the Swedish universities, where Roman Catholicism had a role to play in it being so educationally forward.

$2: Oh yes. Uppsala has so much history to it. You can see it everywhere today, from the streets to the walls of the buildings, down by the river too, there are just so many beautiful buildings lining the riverside, all from hundreds of years ago. < pause > And yes it’s absolutely beautiful here. So beautiful!

With the meeting of so many people at the conference, it is usual that there are many more visitors to the city of Uppsala than residents participating at the event. After a short realization on the part of speaker $1:

$1: But, you live here, don’t you? < pause > I mean, you’re not a visitor as most of us are for this conference. You are yourself, working at Uppsala University, isn’t it?

$2: Yes, yes, I’m with Uppsala University. And no, I’m not a visitor. In fact, I’m just looking for my husband because we have to coordinate picking up the children at the daycare center today, and I’m booked for the afternoon. But I just < love it > here!
@ < emphasis >

If the conversation had taken place over the topic of living along the Swedish west coast with its various archipelagoes, the picture would have been tinted slightly grey from the often thought of rosy nautical hues of living by the North Sea that has the Gulf Stream bring warmth during the winter months. “It’s lovely to be living out on the islands at the west coast!” is the often heard comment to those living there, “Well yes, but it’s cold” would have been the counter-balanced reply, else, “Yes, but the commute into Gothenburg city is a disaster” would be the other counter-balanced reply.

But nothing of that sort was heard when it came to Uppsala city:

$3: I’m so happy that you’re all here in Uppsala city, where I’m happy to be hosting you! I know I had promised you snow, and there isn’t any right now, sorry about that. But we do have the dark, and the dark is glorious to behold isn’t it? 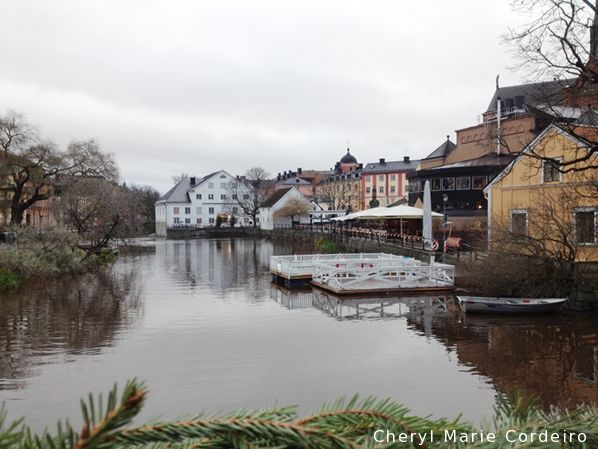 Fyris river, with Domkyrkan just out of sight to the right in the photo. 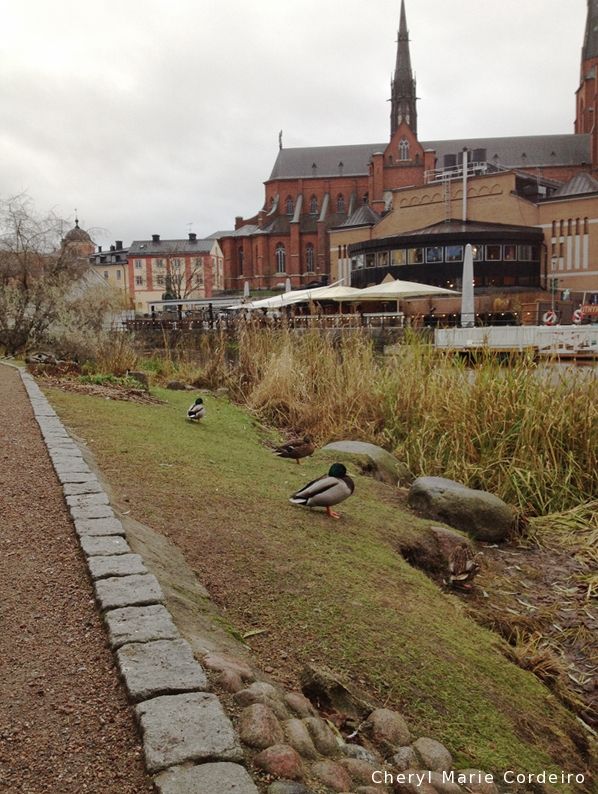 Well, in mid-December, considering the Land of the Midnight Sun and its seasons, I could find no fault with the argument about the dark. The darker months in Sweden are often countered with a myriad of Christmas lights hung in windows, put up as early as late September in some places. These Christmas lights substitute for everyday window lamps during the winter months, the fact that they looked festive was a plus. The lights, together with mugs of hot blueberry soup, and smaller mugs of glögg make for pure winter therapies.

There is little doubt that Uppsala city is beautiful. What is considered their not so pretty side – designated east of the Fyris river where two larger A. Cragg sculptures stand near the centralstation – I thought was not quite as unpretty as described either.

That the city is a university-city is as statistically evident [1] as its fabric of life. Numerous cozy cafés equipped with wi-fi and for young professionals gatherings dot the gridded quarters. One in particular is a possible favourite. Located near the medieval St. Olof’s Bridge at the junction of St. Olofsgatan and Sysslomansgatan (a street known to date back to 1640 as a toll gate between northwest and southeast Sweden) that has been around since the late 1800s is Ofvandahls café and patisserie.

It having been the day of St. Lucia celebrations that I visited, it was the aroma of freshly baked saffron breads that greeted me as I entered the café. Lussekatter, and a variety of saffron bread were placed in the counter shelves, up for guests to choose from in their fancy. Uncertain as to how much other guests liked hot chocolate, the main pull factor at this café remains for me, their generous portion of hot chocolate served with whipped cream.

A surprise – they sold white English Christmas fruit cakes, to which I took the opportunity to bring home, one. The larger of the two sizes offered.

Serving as appointed confectioners to the royal court, their creations are today marked by the royal coat-of-arms where appropriate. The café is also famed for having its interiors unchanged from the time of art deco in Sweden. I sat on an early 1900s sofa in the style of Karl-Johan. If anyone wanted rustic, this would be it.

There was indeed snow on the morning of St. Lucia (13th December), the snow having fallen over the night and people awoke to a landscape dusted over in soft white. Considering the hot chocolate at Ofvandahls to be located just a few metres west of the Fyris river, then perhaps yes, in a city that is generally beautiful, the west side could be argued to be prettier. 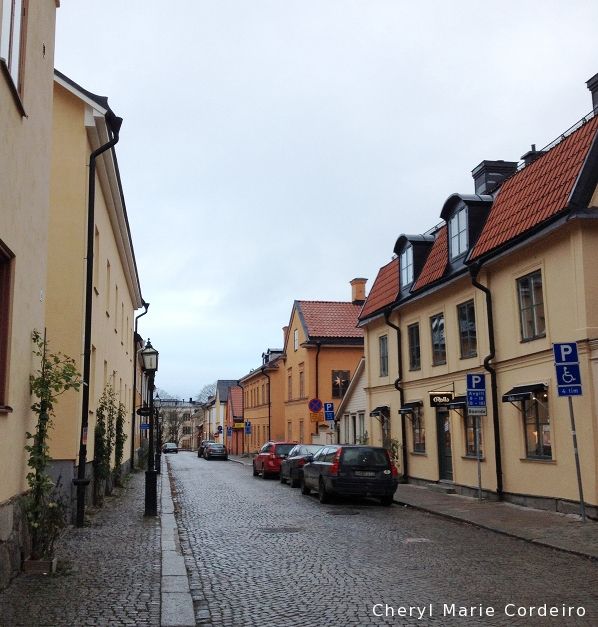 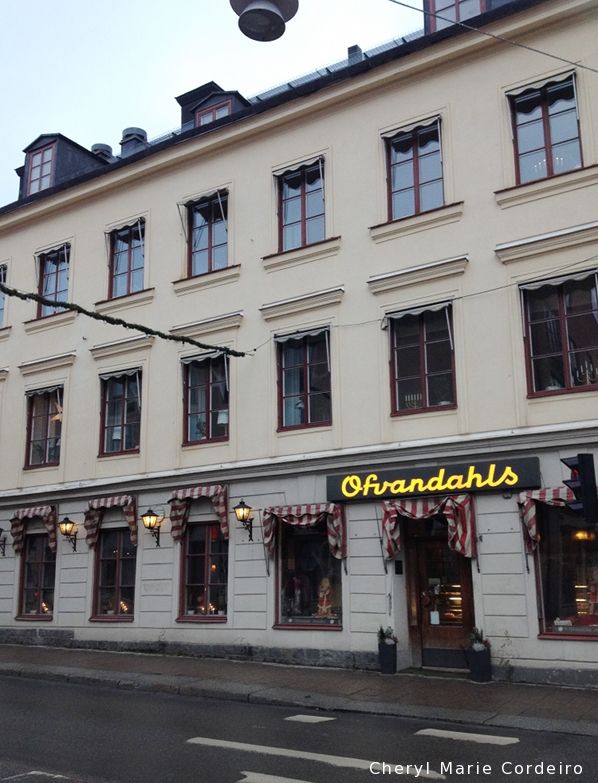 Sysslomansgatan is a street known to date back to 1640 as a toll gate between northwest and southeast Sweden. It was in this quarter too that the first professor houses were built for those working at Uppsala University. 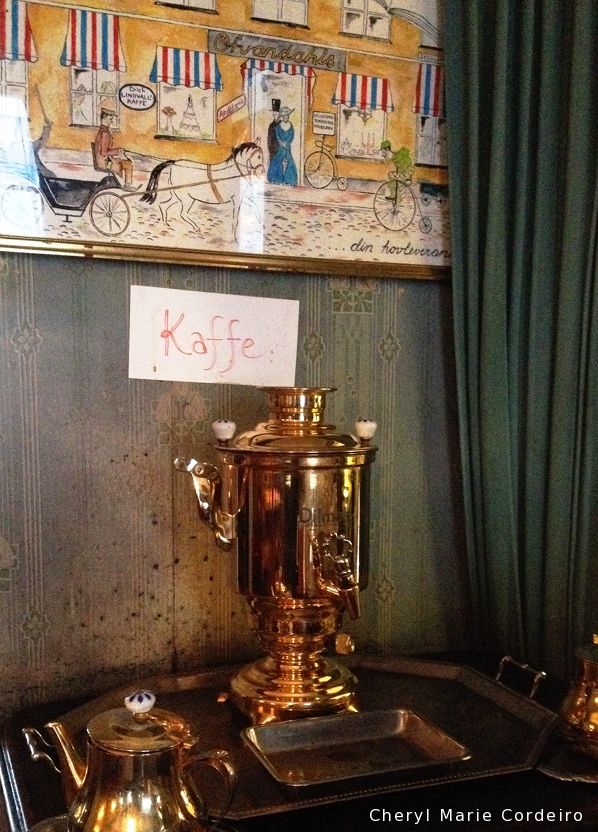 Wallpaper in the style of art deco, Sweden. 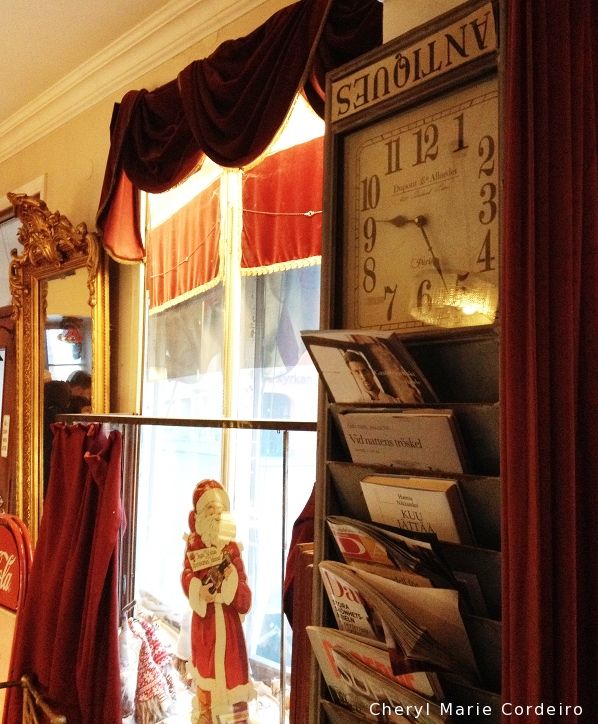 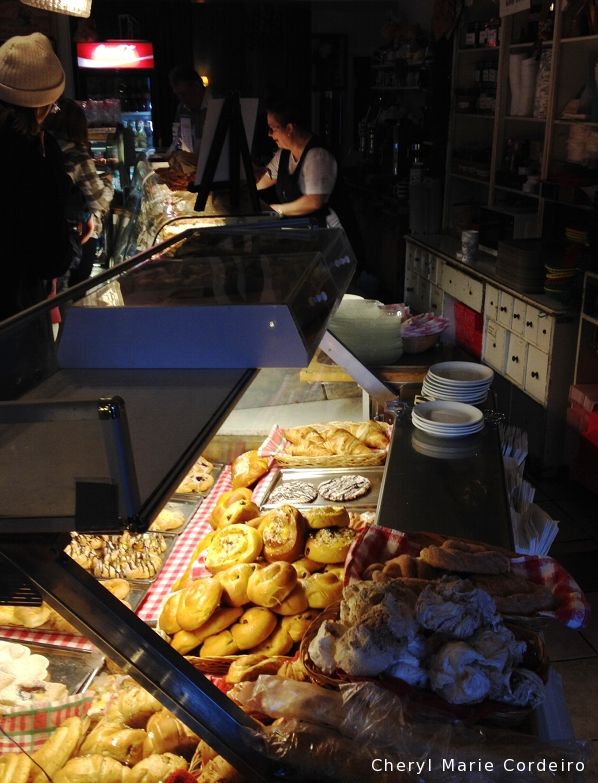 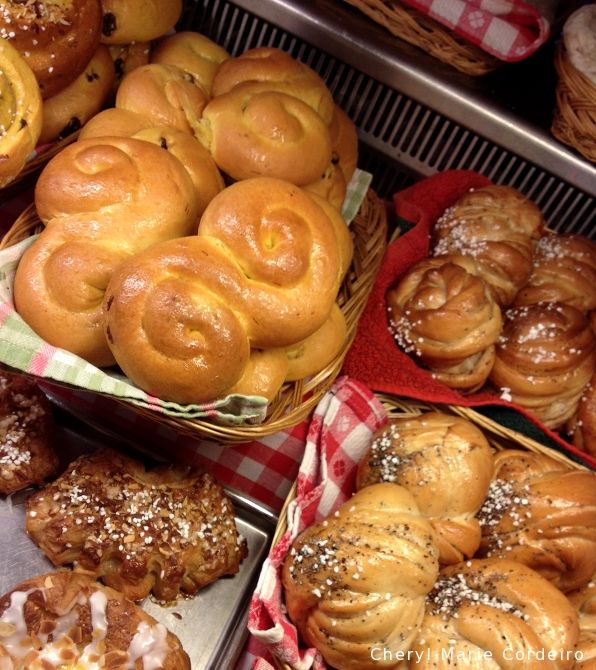 A variety of saffron breads in celebration of St. Lucia in Sweden, from Lussekatter to Lussebullar. 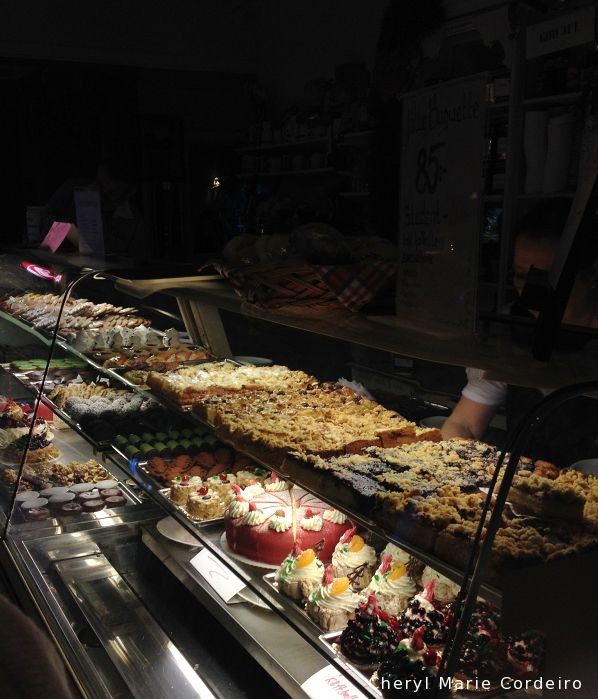 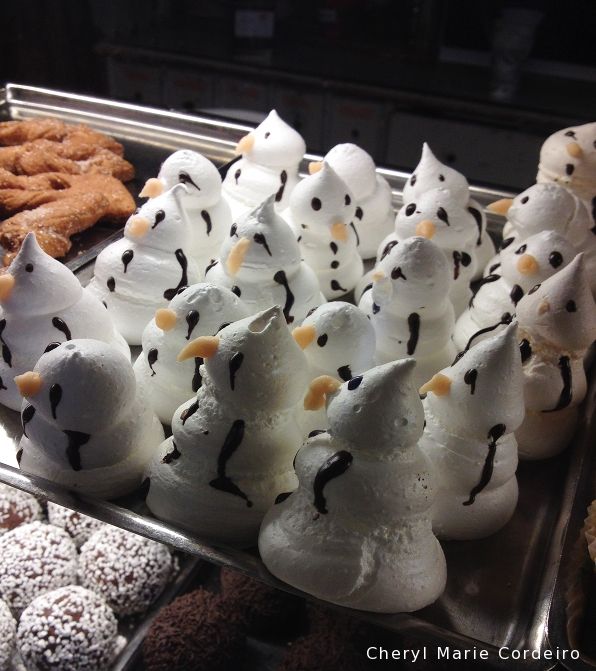 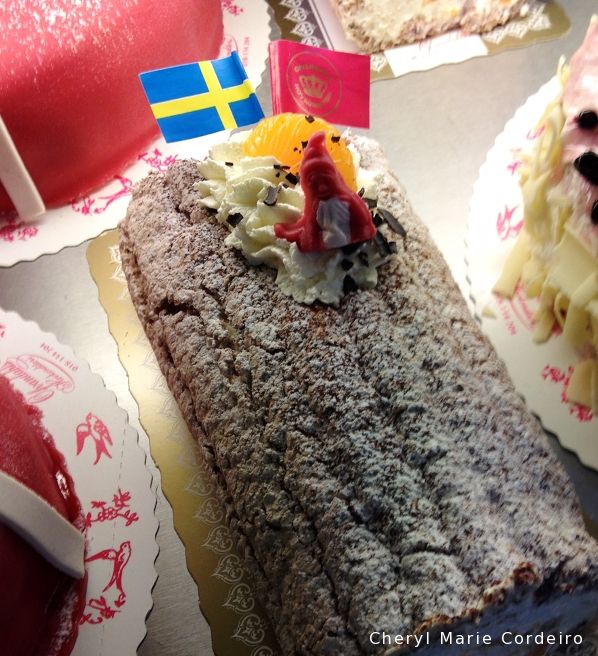 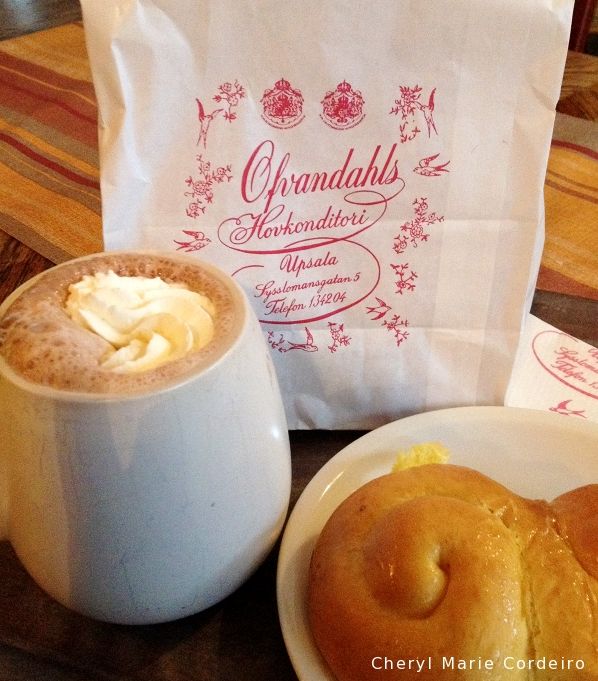 The west side pull factor – a generous mug of hot chocolate topped with whipped cream. 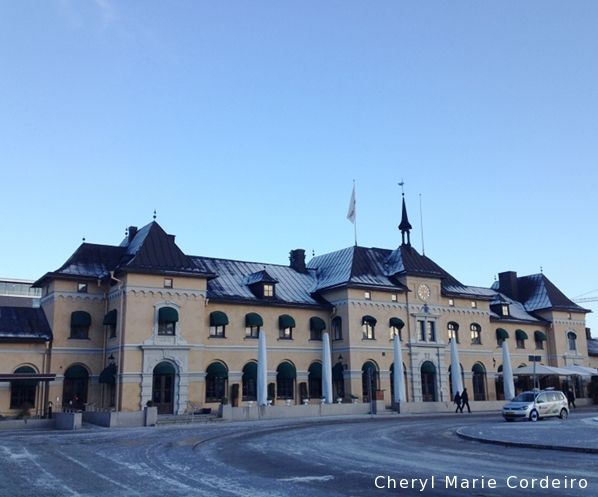 [1] Uppsala 2014. The municipality of Uppsala in figures, Uppsala Kommun. Internet resource at http://www.uppsala.se/pages/72488/Statisticalbrochure2014.pdf.