Doctoral awards ceremony at the University of Gothenburg, 2009 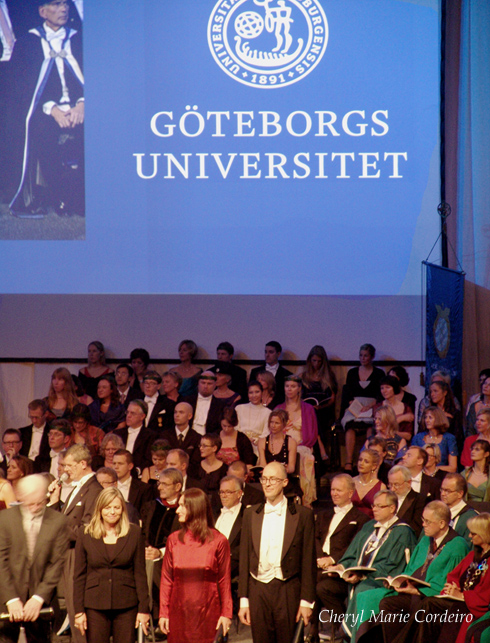 On stage, halfway through the ceremony. I’m seated third row from the back, in a white dress. Deans and faculty leaders of the University of Gothenburg (GU) are seated at the front of the stage, in the respective faculty colours and gowns.
Text & Photo © JE Nilsson, D Neikter Nilsson, A Lindström, CM Cordeiro, Sweden 2009

The 30th of October, 2009 was the University of Gothenburg’s annual prize giving and doctoral awards ceremony and gala event. It was wonderful to have these grey autumn days lit by people dressed up in formal attire, tailcoats mandatory for all men receiving awards that evening, and all women in long dresses or ball gowns. Everyone looked smart and regal.

For this event, I wore the full length, white crochet dress that my mother had made for me more than a decade ago. It was meant for my college prom night, so I was 18 years old when I wore this dress the first time. 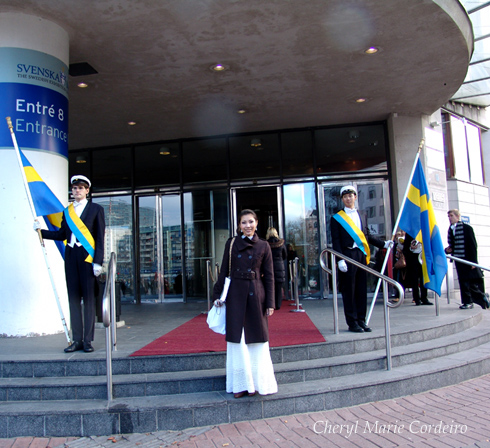 At the entrance of Svenska Mässan, the Swedish Exhibition and Convention Center in Gothenburg, location of the University’s Academic Gala 2009.

The location was Svenska Mässan conference hall. At the center was a flurry of people and happenings surrounded the main entrance. Taxis and stretched cars alongside the entrance dropped people off. An innumerable number of cars were lined up opposite the entrance, an endless stream filtered off to various parking spaces. Well dressed individuals, all streaming in the same direction, entered the building.

Inside the building, the air was filled with quiet anticipation with a low murmur through the crowds. One could sense a certain amount of electric nervousness running through the recipients of the awards! “I can’t believe I’m more nervous today than at my public defense!”, gushed my girlfriend in a hushed tone, just before the ceremonial march-in procession. 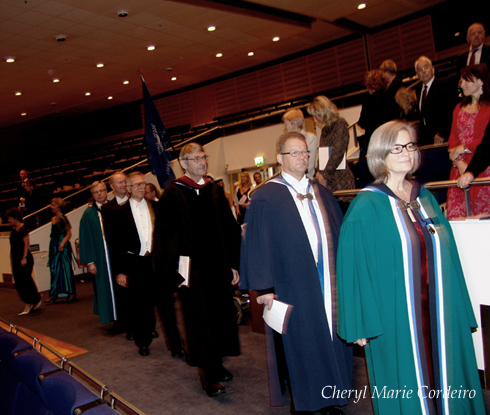 A view of the incoming procession, from the back of the auditorium.

It wasn’t long before the promovendi, together with our faculty leaders were led into the auditorium to a march by Bernhard Henrik Crusell. Each faculty had its respective flag in lead position, followed by the faculty’s Dean and leadership, wearing their respective colours and gowns. These gowns were donned specifically for this ceremonial procession, and taken off before the gala banquet later that evening. 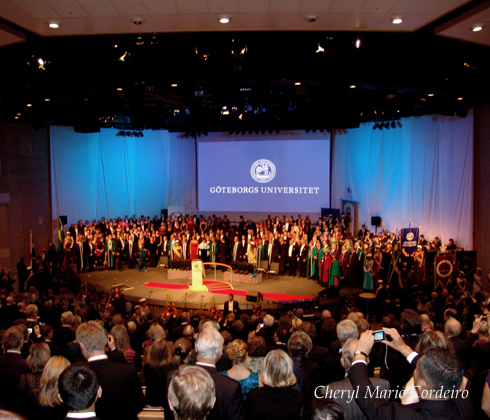 All on stage, before the opening speech by the University’s Vice-Chancellor, Pam Fredman.

There were altogether about 650 guests in the audience that evening, with about a hundred recipients on stage. Looking at the picture above, the Faculty of Science flanks the left side of the stage with the Medical and Humanities in the center, the Business and Economics Faculty together with Education and Pedagogy are to the right of the stage. 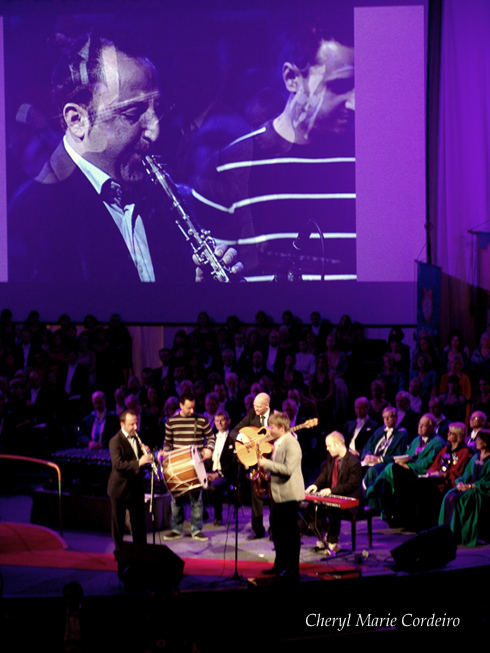 The event with much ceremonial rites and fanfare was complemented with various entertainment programs in between the faculties.

I had mixed feelings about this event when I received the Invite, because the only other comparable academic ceremony that I had experienced was in Singapore, when I graduated with my Bachelors Degree at the National University of Singapore (NUS). It was a 3 hour long ceremony, with hardly any breaks in between with name after name being called. And if this was anything like that, then I feared this would be a long evening…

But GU’s event proved different. The hours passed without much notice as the event was punctuated with various entertainment, from instrumental music to opera singing, a cappella and a Shakespeare sonnet reading, where the actors said that ‘in order to match the combined intelligence in this room, they would recite the sonnet backwards whilst leaving the stage’. It was hilarious and they did a splendid job at it! 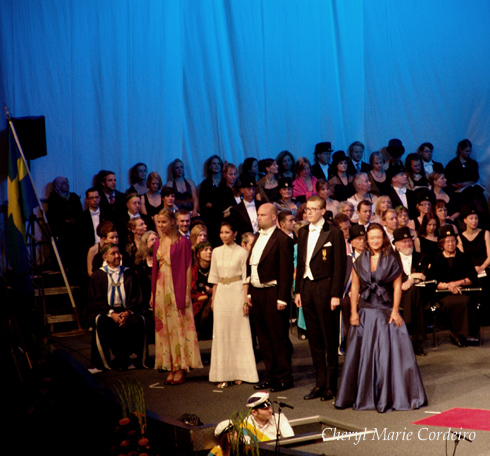 Part of the Faculty of Humanities PhD graduates.

All faculties of the University of Gothenburg were present at this event and the ceremony began with prize giving to the Faculty of Science, followed by Sahlgrenska Akademin (Faculty of Medicine), Humanities, Business and Economics and so on. 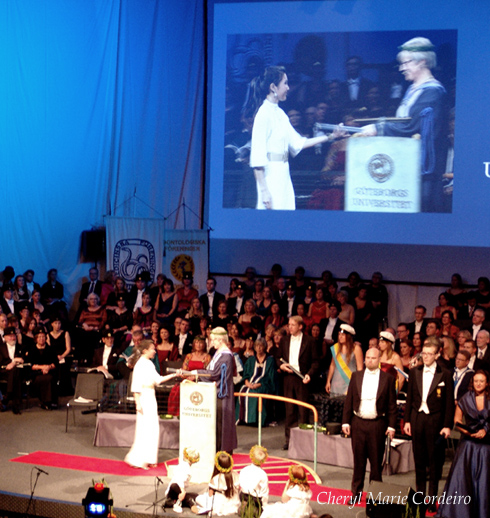 Receiving my PhD certificate from Professor Gunhild Vidén, Head of Language and Literature, Faculty of Humanities.

The promovendi were divided into small groups of 6 individuals at a time, to be at the front of the stage when receiving their awards. This gave each recipient a face and time for the rest of us to follow the program in the booklet handed out, reading the titles of their thesis and their field of work. 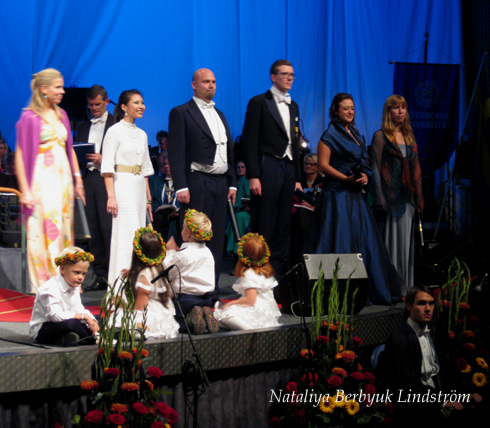 All graduating doctoral students and award recipients will receive a certificate scroll in recognition of their accomplishment. In addition to that, a doctoral graduate could also choose to have on a Doctoral Hat, a Head Wreath made of bay leaves and/or a gold ring. I think I saw just as many doctoral hats as there were wreaths of bay leaves on my graduating colleagues. The laurel tree that the bay leaf comes from was very important both symbolically and literally in both Greece and Rome. The laurel tree often appears as a central component in ancient mythologies and this tradition continues today, where the tree marks a symbol of honour. 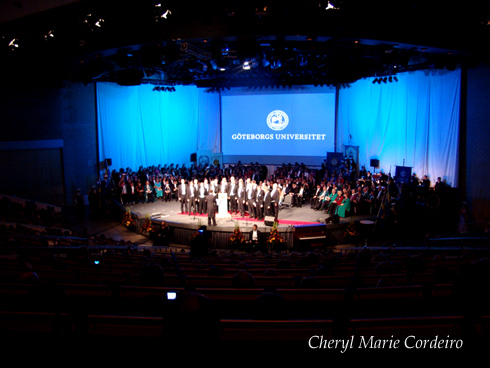 After two and a half hours of ceremony, the last performance for the evening was by the Akademiska Kören (Academic Choir), that teased the crowd with various – and endless – renditions in tone, of the line “It’s soon ooooooooover now”. 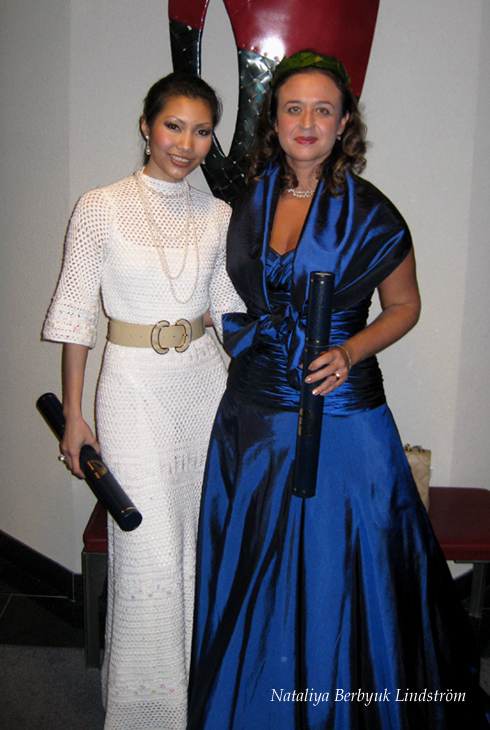 Nataliya and I, after the exit march from the auditorium.

The procession filed out of the auditorium with a military march from P Tjajkovskij, to a champagne and hors d’oeuvres mingle session before the evening’s Gala Dinner. 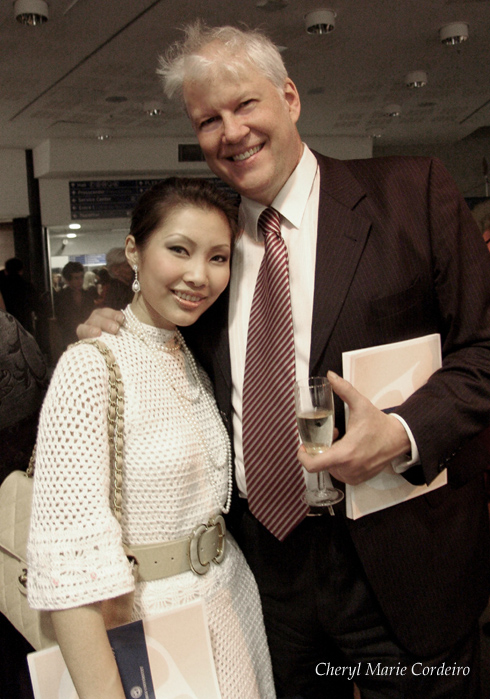 It was a memorable evening, one in which I absolutely enjoyed myself throughout, and probably, a once in a lifetime event that I am most happy to have shared with family, friends and guests to this blog.

To all who sent me their gratulatories, Thank You for sharing this event with me!