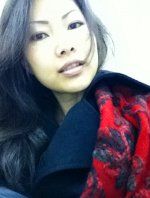 With the quick glances of distraction observed from tourists and a slight quickening of their pace past the local lunch scene at Yuyuan in Shanghai, where the local people seemed perfectly at east sitting along the roadside with their bowl of rice in one hand and chopsticks in the other, eating whilst waiting for their next customer to walk into the shop, I understood with clearing clarity that for most of Northern Europe, dining was a much more formal affair around a set table.

And the Northern European concept of dining was quite a contrast to this fairly common aspect of people eating on the move or simply eating outdoors in Asia in general. Whether in India or the various equatorial countries of Southeast-Asia such as Thailand, Vietnam, Singapore and Indonesia, or the more temperate regions of China, food sold along the streets in wheel carted food stalls and eating along the streets is as practical and nomadic as having all your goods for sale stacked onto a single bicycle or motorcycle and sold wherever you found a customer along the street. 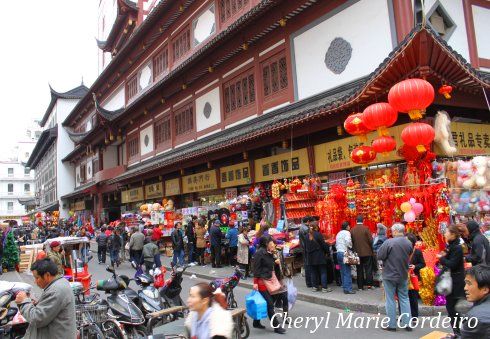 I grew up in the decades of Singapore where people did cart their goods around and sold them from their bicycles, and where food such as bowls of noodles, plates of fried kway teow and even cold food such as ice-shaved desserts called ice-kachang (a Singapore and Malaysian variation of ‘sorbets’ made from just rough shaven ice and sweetened with colourful syrup dripped all around the cone of ice shavings) were sold from wheel-carted trolleys. For warm dishes, burning charcoal was used for fuel in the mid-1900s for cooking and later on, small portable gas units were used.

Still, the scene in China is much more rustic and unaware – people just didn’t think if you stopped and stared at them eating, because for them, it was all part of the natural process of the day, just another practicality that you have to deal with, seamlessly interwoven into their main activity of the day, which is working. Living and working seamlessly – that is what you’ll witness at lunch hour at Yuyuan. 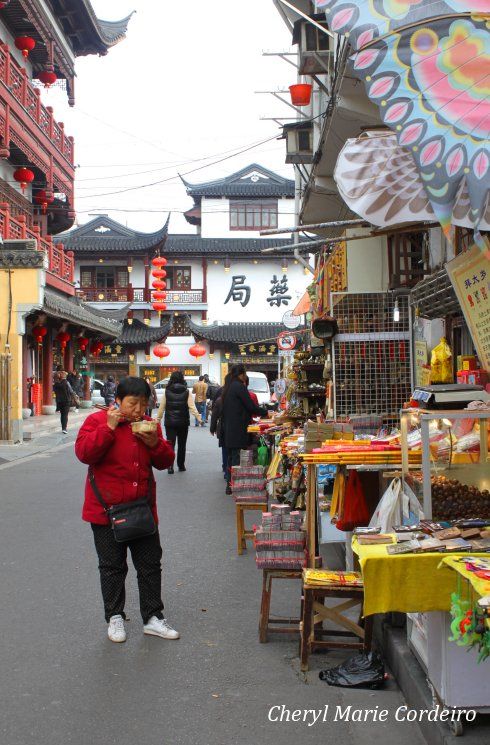 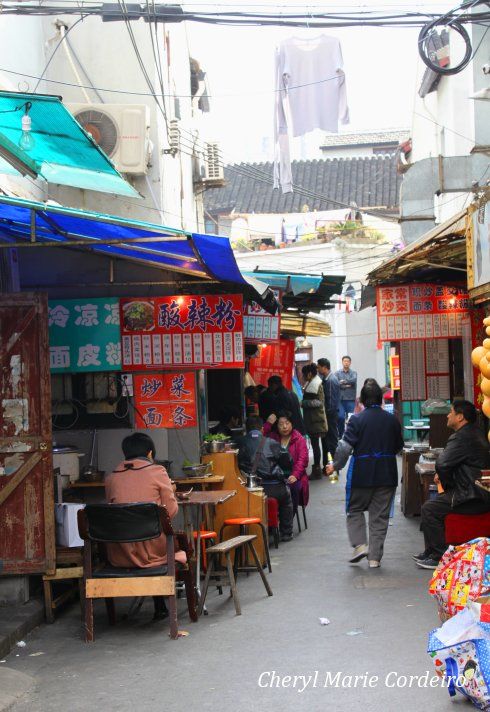 And if you had children to take care of and feed, then they would also become part of the practicalities needed to be taken care of, you feed them, see to their daily needs even if it means cleaning up after them on the streets with nothing more than pieces of yesterday’s newspapers, then feed yourself and see to that your customers who walk into your shop are cared for too. Nothing quaint at all, just practical. 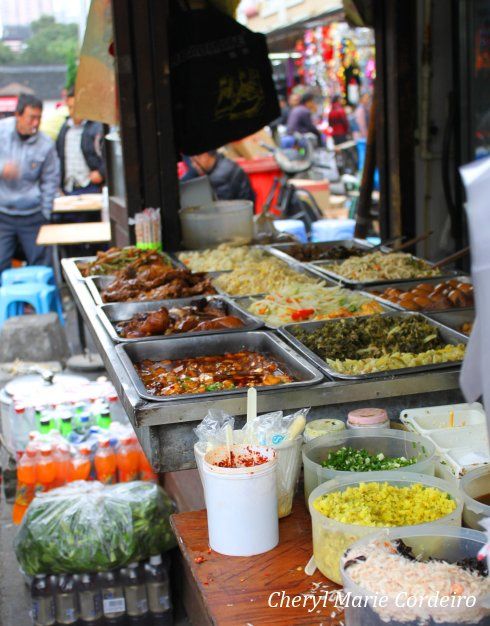 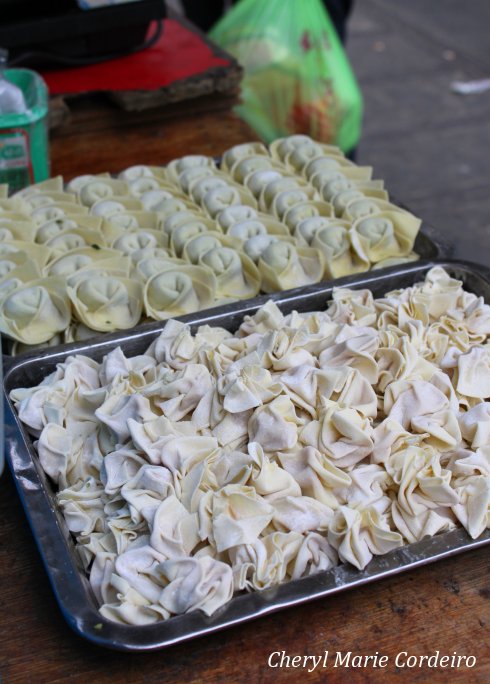 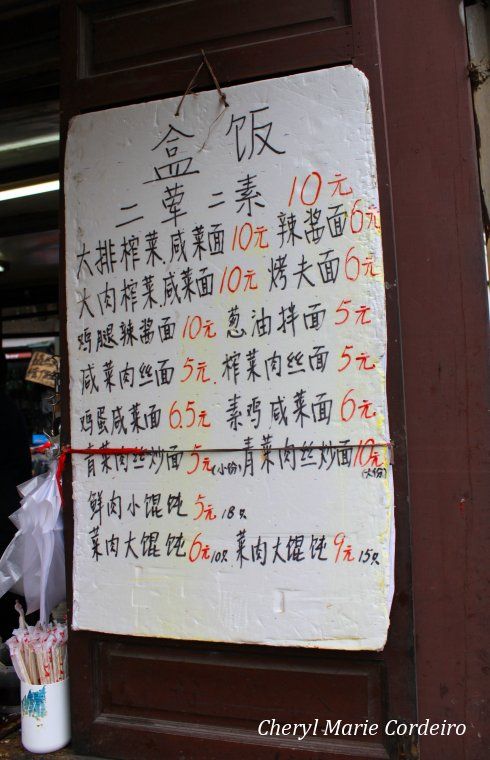 Price per bowl of noodles at this street side food stall. The prices in Yuan (元) or RMB where 6.5 equals pretty much 1$ USD.

As I walked through what I thought was the wholesaler’s block at Yuyuan, only because the front streets were filled with loaded carts going in and out, with a line of outgoing goods stretching all the way to the larger main street of Yuyuan, I couldn’t help but notice the neatly hand folded dumplings that lay in trays at one particular food stall. It was a brown painted wooden paneled stall that was in slight disarray already from the morning’s early lunchers, with some noodles and vegetables strewn leftover on the ground, and where without doubt, most anyone coming from where I’ve lived would consider three times before politely declining any invite to eat there. But apart from the disheveled look of the stall, what caught my attention was the price per bowl of noodles, that indicated a much different life compared to just a few streets away where artist signed Chinese calligraphy paintings are being sold to tourists at 12,000 RMB a piece. The difference in reality is simply stunning. 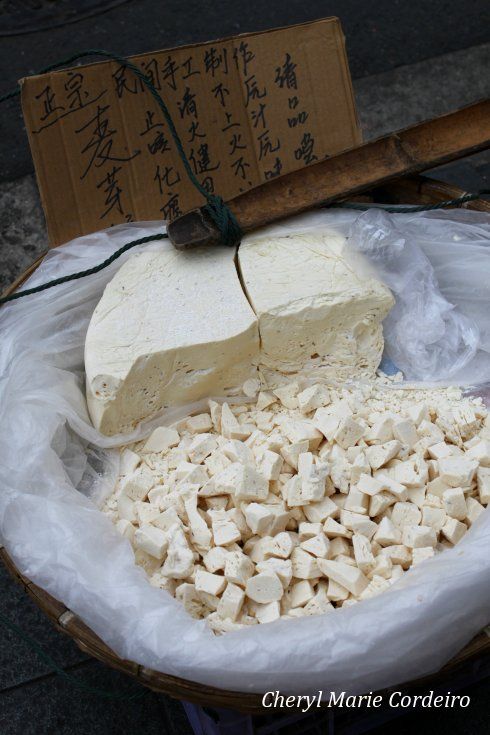 Hard candy, placed in basket weaves, carried on the shoulder from street to street and sold on the street grounds, wherever there are customers. 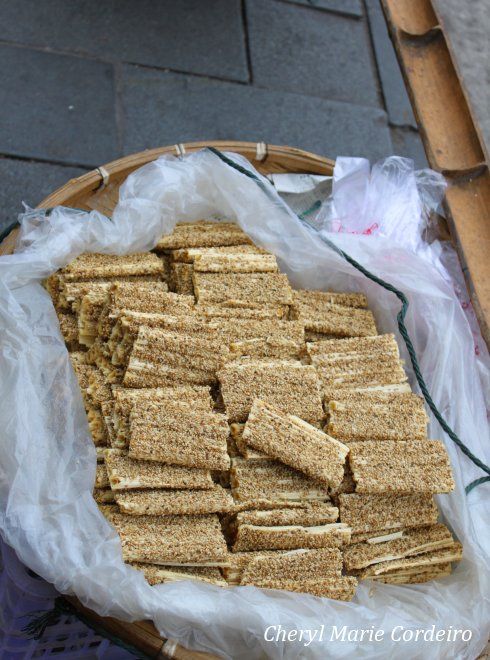 Darting through this particular block of shops, navigating across the heavy traffic of bicycles, carts, trolleys and people, carefully sidestepping the puddles of water that have collected in the cracked tarmac of the roads due to a particular heavy Monsoon season in Shanghai at the moment, I noticed too that even with camera in hand, people didn’t bother if I were local or tourist. They were plain too busy getting on with their own lives to discriminate or care.

But if you happen to step in their path, where they need to bring their goods out to the main street and you take just a second too long for their patience, they might just well acknowledge your presence with a honk of a horn or a shout of “Coming through – MOVE!”